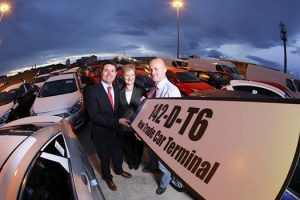 Dublin Port Company, which provides ro-ro services at the Irish port, has opened a new €3.4m ($4.3m) car terminal, which will have capacity for 2,500 units and includes an 80-metre flyover bridge across the East Wall Road running alongside the port. The terminal took 13 months to complete and was officially opened by Paschal Donohoe, the minister for Transport, Tourism and Sport, on October 13.

The inclusion of the flyover also makes it possible for finished vehicles to be moved between the port estate and the new terminal without having to interact with local traffic.

However, while recent growth has been encouraging, it needs to be put in historical context. In 2007, the port handled 141,346 finished vehicles, dropping to 96,192 the following year, as the recession began to bite. Figures hit a nadir in 2009 when just 23,598 units were handled. Thereafter, recovery kicked in and last year's figure of 60,905 units was equivalent to growth of 15.4%.

“The opening of the new trade car terminal at Dublin Port signals confidence in Ireland’s economic recovery and motor industry,” said Donohoe. “The car industry supports thousands of jobs and this investment by Dublin Port Company will further facilitate the growth in this sector. The opening of the terminal today reaffirms Dublin Port Company’s commitment to planning for future growth in a timely and forward-thinking manner.”

For his part, Eamonn O’Reilly, chief executive, Dublin Port Company noted: “We have invested €3.4m in developing this facility that will cater for the growing number of trade vehicles arriving at Dublin Port. The trade vehicle figures for 2014 are already positive, up almost 30% on this time last year. We expect 2014 to be Dublin Port’s strongest year for trade since the peak of 2007 and trade vehicle imports will be an integral part of future growth.”

Lucy McCaffrey, chairperson, Dublin Port Company, added that by locating the new car terminal on East Wall Road, Dublin Port Company has further consolidated its use of existing quayside space, allowing other port operations to benefit from improved proximity to the quays.