ECG highlights the opportunities and threats of a digital future 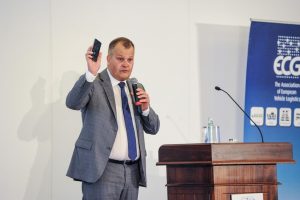 The looming arrival of self-driving cars could be a serious threat to the future of finished vehicle logistics providers, those attending the Spring Congress and General Assembly of the Association of European Vehicle Logistics (ECG) were warned.

Speaking at the event in Malta last week, Pavel Haidai, president of Ukrainian vehicle transport provider, Avtologistika, pointed out that the arrival of vehicles that could soon deliver themselves was a major technological shift that would test finished vehicle carriers’s ability to adapt and compete.

“LSPs have to work on offering a better service for vehicle delivery to compete with the product’s ability to deliver itself,” he said. “It will be based on sharing information on a global basis. We are trying to solve a global issue and it depends on information sharing.”

The digitalisation of finished vehicle logistics sector will also bring many opportunities, however. Wolfgang Göbel, president of the ECG and chief sales officer at German finished vehicle transport provider Mosolf Group, said digitalisation had many practical applications ahead of self-delivering cars, as well as the potential for big cost savings. Better connectivity was one of them, he suggested.

“It is about creating platforms,” he said. “When you have a certain number of compounds where you move vehicles and you have a network of transport means to connect all of these, you can give your customer as well as your internal organisation the chance to have visibility and a certain way of steering, and to have transparency in the whole process.”

Another call for e-CMRAnother more immediate implementation of digitalisation is in the development of paperless documentation required for international delivery of finished vehicles, and the ECG is already involved in efforts to cut waste and improve efficiency by moving to the electronic consignment note (e-CMR) across the EU.

The e-CMR seeks to replace the freight transport documents that are legally required and carry the standard set of transport and liability conditions for moving goods in Europe. Using such digital documentation could pave the way for further use of paperless processes, such as for invoices and customs, as well as electronic proof of delivery (ePOD).

Hans Lip (pictured), international sales and marketing manager for TransFollow, an independent digital platform provider for the logistics industry, said now was the time to adopt digital consignment technology. He presented figures showing potential savings for the industry of €1.7 billion ($1.9 billion) across the 28 EU states, which handle 377 billion paper CMR notes on cross-border movements a year – the equivalent of 166,000 trees or 600 truckloads of paper.

The efficiency gains were also significant, according to Lip, who noted that an e-CMR could be issued to everyone involved simultaneously and offered real-time proof of delivery, faster payment and a secure and legal signature, as well as reduced administration costs.

“e-CMR is vital for visibility,” said Lip. “By issuing e-CMR into the platform, all participants can see it. You can forward it to the carrier and the consignor can see it as well.”

However, it is up to the market to convince governments to adopt the protocol. So far, only 12 countries on the European continent have adopted it and only 10 of them are EU members – fewer than half of the EU’s member states.

Violeta Bulc, European commissioner for transport, said in March this year that she wanted to see all EU member states adopt the protocol by the time her term ended in 2019.

That now looks like something of a challenge, given the apparent barriers both government and industry are raising which include everything from threats to employment to worries over investment costs.

However, Lip said now was the time for the finished vehicle sector to adapt to new technology and do something with it.

“It is always rather strange to me why we accept and are adaptive to new technology in our private lives but in the industry you always see barriers to it,” he noted.

Ingenuity begins at homeAccording to Göbel, there is always resistance from outside the industry but transport companies have the freedom to change things in their own working practices, one of the points of discussion in ECG’s Digitalisation Working Group.

Göbel said it was typical of companies to complain that they could not adapt such technological advances because the politicians or government were not implementing the necessary rules and regulations.

“However, it is good to start somewhere and give examples proving what you can do,” he said, noting the moves Mosolf made between France and Germany or the Czech Republic, which were perfect for the application of the e-CMR.

[related_topics align="right" border="yes"] Costantino Baldisarra, commercial, logistics and operations director at Grimaldi Group and ECG board member, added that in a fast-changing world, businesses had to adapt to new technology and the advantages it could bring for their customers, as well as themselves in terms of reducing cost. Paraphrasing Charles Darwin, he said it would not be the strongest of the species that survived, nor the most intelligent – but the one that was most adaptable to change.

The ECG revealed its own adoption of new technology at last week’s event with the release of an app digitising its news and information resources, including the ECG Operations Quality Manual. ECG News is available for download at the App Store.