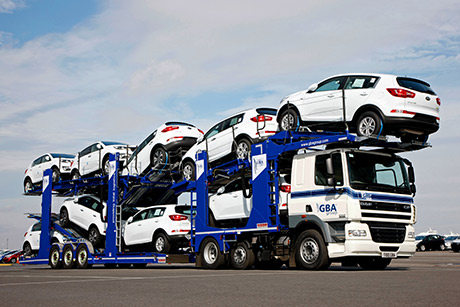 Several pilot projects involving major automotive OEMs and logistics service providers (LSPs) are likely to get underway in Europe over the next few months in the latest stage of an initiative by the Association of European Vehicle Logistics (ECG) to tackle capacity shortages by improving forecasting methodologies.

The aim is to test out a series of best practice procedures formulated by an ECG working group after an intensive analysis of the operations of six OEMs and six LSPs in an initiative called Project Caesar that started some 18 months ago. The procedures will involve the use of standardised data transmission formats and the implementation of a ‘toolbox’ of appropriate techniques within a ‘stable pattern’ of reporting between the manufacturers and logistical service providers.

Details of the pilot projects were revealed last week at the 23rdECG Spring Congress and General Assembly in Madrid by ECG working group member Ben Waller, associate director of automotive distribution consultants ICDP, based in Solihull in the UK.

“Delivery forecasts from OEMs are at best variable, at worst very poor and in many cases non-existent,” said Waller about the current situation.

How that typically plays out in practice is highly variable, depending mainly on the timescale over which forecasts are made, said Waller. While variation in forecasts for compound to dealer deliveries over a year was “quite good” at just 13%, he said, it then declines to 67% for “mid-term weekly” forecasts. At a daily level, meanwhile, forecasting was in some cases “completely out of control at 700% levels of variance”, said Waller.

That last alarming figure is somewhat misleading, he added, because many companies “do not break things down to a day level but block it into a week so no-one expects the daily data to be accurate.” Instead, he said, “the timescale to focus on is weekly because that is how the LSPs try to organise themselves.”

The basic fact remains, though, that inaccurate forecasting will inevitably have adverse financial repercussions – the creation of unused capacity if projections are too high and a need for short-term premium-priced logistical resources if they are too low. As such, stated Waller, there is still “a lot of cost to be taken out”.

While recognising that Europe’s resources for finished vehicle deliveries do suffer from “a lack of capacity, a shortage of drivers and insufficient storage space” it is still the case that “we are not making the best use of the capacity we have”, he stressed.

Doing betterHowever, the project team has also found examples of current best practice in which variations between forecasts and reality are much tighter. In the best cases, that 67% figure falls to just 10% and the 700% score to 20%, he said. The project team has therefore sought to synthesise the disparate examples of best practice into an integrated methodology capable of widespread adoption.

The most basic element of the new suggested approach is simply “draft data transmission standards for the whole delivery chain”, he explained. At present, various formats are used with the best current option probably being the Excel spreadsheet system. Email and even faxes are also still being encountered, however.

The real focus, Waller stressed, has to be on identifying which types of data need to be communicated and on establishing appropriate procedures for collaborative working between OEMs and LSPs. And the will to do so exists, he suggested. “LSPs have indicated they would be amenable to a confirmation process for capacity to OEMs, if forecasts could be of a much better quality,” he stated.

The suggested ‘toolbox’ therefore addresses the issues of both required data categories and operational procedures. The first of those include, for example, sales forecasts, wholesale targets, the production programme and order pipeline status as primary inputs to a process that then moves through sales review and delivery forecast creation to final, mutually agreed commitment. In addition, Waller noted, the concentration of data involved should facilitate continuing process improvement.

At the procedural level, the project team suggested a methodology in which a key element is close collaboration between the logistics planning and sales operations of the OEM in which the latter signs off the delivery plan before it is communicated to the LSP.

The need for a single agreed source of such data is acute, Waller explained, because some OEMs may have as many as three different sales forecasts live at any one time with estimates from budgeting and promotions planning as well their formal sales department.

This model has already been proven in practice. Waller confirmed that one of the OEMs involved had a “very well managed forecast review process” in which its logistics planning created a delivery plan “which was sent back to sales to be signed off” before being communicated to external LSPs, which then signalled back their acceptance. Two such confirmation cycles took place in a fixed monthly pattern, he said.

According to Waller, there is no reason why this collaborative, iterative approach cannot be replicated across the whole industry and embodied in formal contracts, provided the key principles are agreed between an OEM and LSP. The important thing is to understand, he stated, is that it is “about people, process and commitment – not just data”.

Unlike the companies involved in the research, some of the participants in the pilot projects are willing to be identified. One of them will be German LSP Horst Mosolf. Its participation was confirmed in Madrid by managing director Wolfgang Göbel, who was re-elected as president of the ECG at the meeting. Another will be fellow German LSP DB Cargo Logistics. Its participation was confirmed by section leader for finished vehicles, Christian Lang, who was also a member of the working group.

Lang said the pilot projects would last just a few months and their results made available by the time of the next ECG Conference in Mainz in October. A formal report should follow before the end of the year.