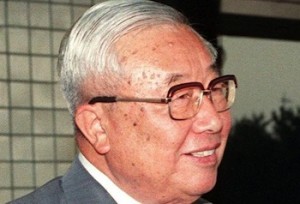 Toyota’s longest serving president, Eiji Toyoda, has died at the age of 100. The cause was heart failure according to the company.

Toyoda, who was the younger cousin of Toyota’s founder Kiichiro Toyoda, worked for the company for 57 years. With a qualified background in mechanical engineering attained in 1936, he oversaw the construction of a new factory for his cousin just two years later. It was later to become Toyota City and is considered the ‘mother factory’ for Toyota production facilities around the world.

He eventually became president of Toyota Motor in 1967 and served for 15 years. When Toyota Motor and Toyota Motor Sales merged in 1982 he became chairman of the combined company serving until 1992. He is credited with turning the carmaker into a major exporter. Under his leadership Toyota Motor set up 10 new factories fuelling these exports and introduced just-in-time production.

When he stepped down in 1994 at the age of 81 the company was assembling Corollas in the US, had started the Lexus luxury brand, and was starting on the development of the Prius petrol-electric hybrid.

Toyoda was also instrumental in the introduction of quality control at the carmaker and its evolution into the Toyota Production System. He laid down guiding principles for quality control in a document produced in 1960 called "Requests regarding inspection." In this, he introduced the notion of "building quality into processes", pointing out that "the idea behind an inspection is to eliminate the need for inspections." In June 1961, TMC decided to adopt the system of Total Quality Control (TQC) to modernise management operations.

A small funeral service for close family will be held this week.