Ekol continues to branch out in Europe

When Turkish logistics provider Ekol started operations in Poland in May this year, it brought the number of countries in which it provides services to the automotive industry to 11.

From its beginnings 25 years ago in Istanbul, the company has grown into an integrated logistics provider handling both intermodal transport and cross-dock services for inbound parts across Europe. It has a strong asset base, including its own fleet of 4,000 trucks, while also using subcontractors. Similarly it owns a significant amount of its own purpose-built warehousing space, as well as leasing facilities. This space comprises 600,000 sq.m, with 500,000 sq. m in Turkey and 100,000 sq.m  in Europe. The company also has its own fleet of five sea-going ro-ro vessels. In terms of staff, Ekol employs 6,200 people across its regional operations.

Ekol is now also looking into growing its nascent finished vehicle business and has said it will have an announcement about a new offering for the vehicle transport market at the end of 2015. It is also involved with the shipment of complete knockdown (CKD) kits and, at least within Turkey, is providing services to the aftermarket.

“Locally, we are providing special solutions for the aftermarket but in the near future we want to do this in Europe in our own offices and facilities,” confirmed Mehmet Şahintürk, general industries sector manager at Ekol, who oversees the company’s automotive business. “At this point we are providing a consultation centre and we plan cross dock centres in Europe for import and export operations to manage carmaker companies and suppliers.”

Automotive revenue
The company has an annual turnover of more than €404m ($454m), with more than 30% of that revenue derived from the automotive sector. According to the company, it is the biggest single sector contributing to its turnover.

“I can say that in the last five years the automotive sector revenue and percentage of the total dramatically increased year on year, and we have reached more than 30%,” said Şahintürk. “We also have good potential so the future is looking good, and our expectation is to increase revenue from the automotive business.”

Germany – which Ekol began working in back in 1996 – is the top market contributing to its revenue, but Şahintürk said its automotive business was growing in stature in all the other markets in which it operates. Along with Turkey, Germany and Poland, they include Hungary, Romania, Italy, France, Ukraine, Greece, Spain and Bosnia-Herzegovina. According to Wojciech Brzuska, general manager, Ekol International, the company plans to add offices in more countries over the coming years.

Mercedes-Benz, VW, Renault, Honda and MAN are some of the company’s main OEM customers. On the tier supplier side, Ekol provides services for Autoliv and Bosch, among others.

Polish ground
In Poland, Ekol’s newest market, the business split between the automotive sector and the other industry sectors it serves is roughly 60/40. The company said it aims to have a turnover in Poland of €15m ($16.7m) by the end of 2016.

“Poland occupies an important position on the logistics map of Europe,” said Brzuska. “We see more and more companies finding a hub in Poland, for the central and east European countries.”

Brzuska added that, along with a growth in trade between the two countries, Poland’s importance as a logistics hub had influenced Ekol’s decision to set up its own operation there.

According to Ekol, intermodal solutions coupled with warehousing and customs clearance services are in demand in Poland. Artur Pohl, country manager for Poland at Ekol said, “We are planning to have daily rail services connecting western Europe with Poland in order to be able to offer intermodal solutions not only to and from Turkey but also inside Europe, especially to countries where Ekol has its subsidiaries. We will be offering one-stop shop solutions to our customers.”

The company, which started operations in May from Katowice – one of Poland’s major logistics hubs – has a number of automotive customers in the country already (along with other sectors). These include Mercedes-Benz, Volkswagen, Fiat Chrysler Automotive, Tofas, Ford, Autoliv and Jaguar. 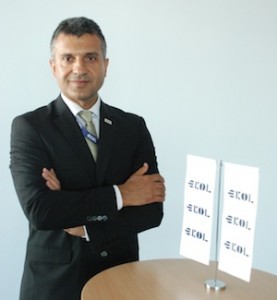 European corridors
Between Poland and Europe (including the eastern region), Ekol is providing groupage transport, as well as handling full container load (FCL) and less than container load (LTL) movements. According to Şahintürk, the company has focused its expansion into European markets on the north-south corridor but is now in discussions on several intermodal projects between west and east Europe.

“We will announce them in due course,” said Şahintürk, but we are also looking for other solutions to develop collections between Turkey, Poland and the EU.”

One of those solutions is to grow its automotive business in new EU markets on the back of the established roots it has in other industries. Spain is a good example of this, where the company’s main strength since it landed in 2014 is in supporting the textile market. However, Spain is also a market in which Ekol is seeing increasing interest from automotive customers.

“Nowadays our main focus is textile but we are following the situation forward with the automotive market there,” confirmed Şahintürk. “Spanish automotive companies have links with our Turkey operations, for example MBHA [the Spanish division of Turkish company Baldur], and we know there is good potential here. We are making long term plans for Spain and we will open a new branch there during this year.”

For now, Ekol is providing contract logistics services, with cross-dock facilities in Barcelona, Madrid and Zaragoza. It is also providing transport services to a range of sectors, including the automotive and textile industries there.

Şahintürk said that now is a good time for the automotive industry and for those competing to provide it with logistics services, not least in the expansion of those services.

"We have the new project for finished vehicle transport and we are looking at new opportunities in the aftermarket business in Turkey and Europe,” he pointed out. “We are looking at setting up new consultation centres, especially for exports from Turkey.”

That includes working with automotive joint ventures the length and breadth of the region.

“We are participating in these unions and working to establish new projects in the consultation centres to support export operations to Europe and other regions. That now includes ten countries in Europe and making sure we have our own facilities in them,” Şahintürk concluded.