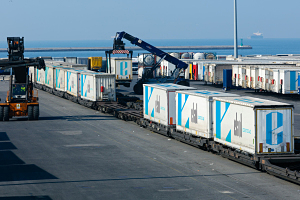 Ekol Logistics has started a new block train service between the port of Zeebrugge in Belgium and Trieste in north-east Italy.

The train will leave EMT Trieste Terminal twice a week and can transport different types of equipment including mega-trailers, containers and swap-bodies.

Last year, Ekol acquired shares in the EMT port in Trieste and announced the development of more intermodal connections from the port. The company says the new train is part of the strategy to develop the port.

“We connected the Mediterranean with the Baltic Sea by the Trieste-Kiel train in January 2017 but now we are very glad to offer to our customers a new direct connection between the Mediterranean and the North Sea,” said Alaa Jennane, director of engineering business development at Ekol.

The new block train will connect Turkey, Iran and the Middle East with the Benelux countries, France and the UK.

The latest news comes in the same month that the company announced another block train service between the Hungarian capital Budapest and Cologne, in Germany.

“We keep executing our strategy to offer more and more intermodal connections inside Europe,” said Jennane.

The new service will be operated by Hupac and is expected to carry around 5,000 shipments per year for Ekol.