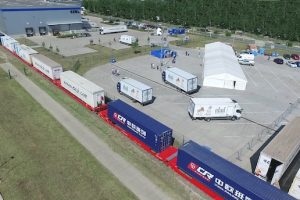 Ekol Logistics has started a new block train service between the Hungarian capital Budapest and Cologne in Germany. A spokesperson for the company said that a third of the freight carried on the train would be automotive, mainly from two companies, and equal to 300 loads a month.

The train will be composed of double pocket wagons able to carry 32 megatrailers (which is how the automotive material is being carried). Alternatively, the train can load 45-foot units, and 60-foot container wagons, which are suitable for 20-foot and 30-foot containers.

Ekol’s spokesperson said that the service was generating a lot of interest from the sector, which was keen to avoid disruption that could occur on the road network.

“We are very happy to open this new dedicated train as, thanks to it, we can connect CEE [central and eastern Europe] with Germany, Benelux, France and the UK,” said Ákos Kovács, country manager for Ekol Hungary. “It is worth stressing it is the first company train in Hungary operated by a 3PL company. So far only public trains have been used in this connection.”

Ekol’s strategy is to develop more and more intermodal connections in Europe and the company now has block trains connecting Trieste in northern Italy with Cologne, Kiel and Lugwigshafen. Ekol has also bought a majority 65% stake in Europa Multipurpose Terminals at Trieste port and is connecting it with Turkey thanks to a new port investment in Yalova under a fully owned subsidiary – Yalova RoRo Terminals.

Trieste is central to the company’s strategy for intermodal transport services.