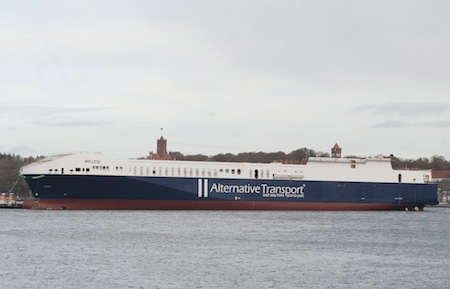 Alternative Transport, the maritime ro-ro division of Turkish transport and logistics provider Ekol Logistics, has launched its sixth vessel at an event in Flensburg Germany. The vessel, named Meleq, will join the fleet in February next year and provide services between Turkey and Italy.

The 210-metre long Meleq, which was was built by Germany shipbuilding company FSG [Flensburger Schiffbau-Gesellschaft], can handle 280 trailers and has a freight capacity of 32,000 tons. A spokesperson for Ekol said that while it will not be carrying finished vehicles it will be handling containerised parts shipments for the automotive industry.

“Three years ago we set out on our journey chartering vessels,” said Ahmet Musul, chairman of Alternative Transport and Ekol Logistics. “Today we are proud to be launching our sixth ro-ro vessel, Meleq. On the way, we have achieved sustainable growth and invested more than €100m ($106m) in expanding our fleet. After introducing Meleq, we will continue to open new routes and increase frequency in existing routes through new investments. Furthermore, we plan to complete construction and begin operations at the Yalova ro-ro terminal in the beginning of 2017. We will be offering significant operational advantages to the industry with our expanding fleet and our new terminal.”

According to the company it has invested $30m in the project.

The Yalova terminal is closer to the industrial zones of Izmit and Bursa amongst others and Ekol said last year that it was moving its ro-ro service there from Istanbul. Yalova is around 92km south of Istanbul. According to the company that move will make significant carbon savings and take 100,000 vehicles off the main arterial roads and bridges around Istanbul.

• In other news, last month Ekol Logistics appointed Ufuk Keçecioglu, general manager of finished vehicle logistics. Keçecioglu has served in various senior positions at Omsan Logistics since 2001 and brings 28 years of experience in the industry, including with carmaker Tofas from 1993 until 2001.