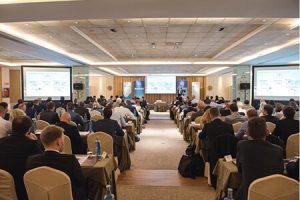 European legislation aimed at achieving more accurate monitoring of emissions from passenger cars could cause disruption to logistics operations involving the storage and delivery of new vehicles, the Association of European Vehicle Logistics (ECG) has warned.

As manufacturers phase out non-compliant older models, dealers are looking to sell existing stock before the legislation comes into force, at which point they could be subject to punitive emissions-related tax increases that adversely affect sale prices.

The warning was delivered by Mike Sturgeon, executive director of the ECG, at the organisation’s recent Spring Congress and General Assembly in Madrid.

Sturgeon told delegates that two pieces of legislation were involved – the Worldwide Harmonised Light Vehicles Test Procedure (WLTP), and the Real Driving Emissions (RDE) regulations that came into force in September last year for the testing of all new car models, replacing the former New European Driving Cycle (NEDC) regulations that date from the mid-1990s.

The WLTP is a set of laboratory procedures for checking CO2 emissions, while the RDE involves on-road testing of vehicles for NOx and other particulate pollutants. Both have been introduced to counter widely acknowledged deficiencies in the rigour and reliability of the NEDC’s procedures. But over the next 15 months, the impact of both will be increased as first WLTP is applied to all new car registrations from September 1 this year and then RDE is applied from the same date next year.

The most immediate consequence of the application of the WLTP to all vehicles, said Sturgeon, will be an apparent increase of 10-20% in recorded CO2 emissions, simply because of the more comprehensive nature of the new test. The WLTP involves simulation of a greater range of driving situations, higher average and maximum speeds, more realistic ambient temperatures and stricter car set-up and measurement conditions.

A further complication is the extent to which these factors could make themselves felt with markedly varying severities in different parts of the continent according to the policies of the relevant national government. This was made plain in a separate presentation by Justin Cox, director global production for market intelligence provider, LMC Automotive.

The response of national governments, he said, could feasibly vary from “non-existent” in the case of Italy, where vehicle taxation is not emissions-related, to “severe” in the case of the Netherlands, Norway and Denmark, given that registration taxation depends heavily on emissions in the first two of those and on fuel economy in the third. Cox indicated that any changes in the UK and Germany were likely to be “minimal”, while in France and Spain they would probably be “moderate”.

Sturgeon suggested most of the effects on the vehicle logistics sector would be felt before the end of this year.

“We are already seeing the stockpiling of cars and we already know that certain models are going to stop production,” he said, adding that the vehicle logistics industry could experience a very sharp if short drop-off in demand for its services on September 1 this year.

Sturgeon conceded however, that nothing was yet certain. “The OEMs have not finalised their planning and the individual countries have not yet formally declared what they are going to do about taxation,” he said.