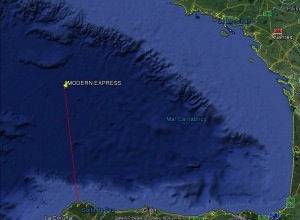 The ro-ro vessel Modern Express, operated by European RoRo Lines (ERL), is currently drifting at a severe list in the Bay of Biscay following a loss of stability in heavy seas and Force 8 gales.  All 22 crew members have been evacuated.

The Panama-flagged vessel, which remains afloat but has no power and is now thought to be taking on water, was sailing between the African port of Owendo in Gabon and the port of Le Havre in France. There vessel is carrying construction machinery and timber.

A salvage operation is planned for 28th January (Thursday) and an emergency towing vessel is now on the scene.

According to the Spanish coastguard (Salvamento Marítimo), which carried out the rescue of the crew members, the ship issued a distress signal on Tuesday (26th January) when it was 148 miles off Cape Ortegal, in waters monitored by the UK’s Maritime Rescue Co-ordination Centre (MRCC) in Falmouth. The MRCC Falmouth worked with the Spanish coastguard in organising the rescue.

Salvamento Maritímo has published a video of the rescue of the crew on its website.

ERL offers direct ro-ro services between the ports of Antwerp and Le Havre, and all main ports in West Africa. It operates two car carrier vessels.