ERL sets up on the Seine corridor 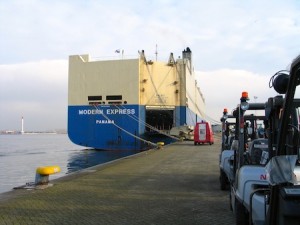 Short-sea operator European Ro-Ro Lines (ERL) is enhancing its services for the transport of new and used passenger vehicles. A new French subsidiary will be based at the port of Le Havre – ERL France – in addition to the development of a new terminal at France’s largest river port at Gennevilliers, north of the Hauts-de-Seine.

The objective, according to the company, is to manage the movement of vehicle volumes from the Paris area to Le Havre, via a river route between the port of Gennevilliers and those ports operating under the HAROPA joint venture between the ports of Le Havre, Rouen and Paris. Volumes are expected to be around 30,000 vehicles per year, all of them secondhand.

Karim Chami, general manager, of ERL France, said the move was based on the company’s need to improve its service offering by establishing itself on the Seine corridor, and especially in Le Havre. He added that it would meet customer expectations for improved quality and environmental performance.

The first call is scheduled in mid-April at the Gennvilliers terminal. Vehicle handling operations will be provided by the stevedoring company Générale de Manutention Portuaire (GMP).