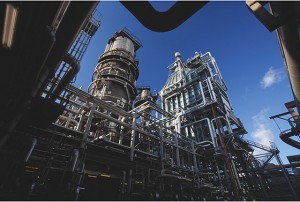 Esso Belgium, an affiliate of petrochemical giant ExxonMobil, has announced it will be converting higher sulphur residual oils into fuel for transport, including for commercial shipping, at its refinery in Antwerp. The move follows tests on a new ultra-low sulphur fuel in conjunction with logistics provider Wallenius Wilhelmsen Logistics (WWL) and comes ahead of next year’s regulation limiting sulphur content used by ships in waters around northern Europe to 0.5%.

“WWL has long experience working with low sulphur fuels, starting with our voluntary low sulphur fuels policy over a decade ago,” said a spokesperson for the company. “As part of our four-stream approach to compliance with new and coming sulphur regulations, WWL has been advocating the development of ultra-low sulphur fuel for the past few years.”

Along with bunker oil with a 0.5% sulphur content provided by the refineries, that four-stream approach includes alternative energy sources, such as liquefied natural gas (LNG), biodiesel and solar power, as well as the use of exhaust cleaning systems (scrubbers) and distillates such as marine gas oil.

“We were very happy to be able to support Exxon with the testing of their product,” continued the spokesperson. “The fuel was tested first in the auxiliary engines of our vessel, and when those tests were successful, in the main engines of the Tonseberg. Everything ran as intended there.”

According to ExxonMobil, it is investing more than $1 billion to install a delayed coker unit at the Antwerp refinery to meet energy needs throughout northwest Europe. It brings investment in the refinery to $2 billion in less than a decade.

Delivering cleaner fuels
Though not specified by ExxonMobil, northwest Europe is the region affected by new sulphur emissions regulations that are being enforced from January next year (AL passim). Sulphur emissions will be limited by EU regulation to 0.1% in the Baltic Sea, North Sea and English Channel from beginning of 2015.

A report in maritime news source gCaptain states that the Antwerp refinery will be making an ultra-low sulphur HDME 50 marine bunker fuel. The fuel shares some of the best properties of both distillate fuel and heavy fuel oil according to the source.

WWL has previously indicated the need for refineries to get involved with finding solutions to the demand for reduced sulphur emissions in ocean transport. At the Automotive Logistics Russia conference held in Moscow in June this year Erik Noeklebye, recently appointed head of Commercial for the company’s Atlantic East business region, said that the company was pursuing global discussions with politicians designed to get ‘upstream’ solutions, including those that involved the refineries.
http://www.automotivelogisticsmagazine.com/news/wwl-restructures-with-top-executive-moves

Those points echoed similar ones made two years ago by WWL’s previous CEO, Arild Iversen, who said the best solution to the forthcoming sulphur emission control areas (SECAs) would be desulphurised heavy fuel oil.  After company research, Iversen said the best route would be to remove the problem at its source, at the refineries producing the fuel.