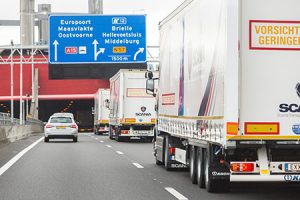 European truck manufacturer body ACEA has provided a roadmap for EU-wide truck platooning calling for a wide range of regulatory change as well as upgrades to EU roads.

Speaking at the European Parliament on May 9th, Erik Jonnaert, secretary general of ACEA, said the roadmap provided an overview of the steps required to implement multi-brand platooning by 2023.

“The technology for platooning with trucks of the same brand is already available today. But clearly, customers will need to be able to platoon with trucks of different brands,” he said. “By 2023, it should be possible to drive across Europe on motorways with multi-brand platoons without needing any specific exemptions or crossing national borders.”

The roadmap also suggests a need to upgrade Europe’s road infrastructure for platooning and calls for government incentives to stimulate the take-up of such technology, such as toll and tax reductions, carbon emission bonuses and flexibility in drivers’ hours limits.

ACEA has not yet put a figure on how much such changes will cost or how quickly it realistically expects such widespread legislative change to be enacted.

Truck platooning has already been successfully demonstrated in various regions. Most recently, Volvo Trucks completed a demonstration with the University of California, Berkeley earlier this year while in January, VW subsidiary Scania and Toyota began a substantial platooning trial in Singapore.

In 2016, meanwhile, Europe’s six major truckmakers all took part successfully in a challenge to route platoons of trucks from their various locations to Rotterdam.