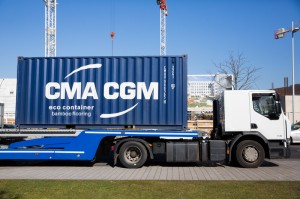 The Automotive Logistics Europe conference raised plenty of legislative issues for vehicle logistics, from dealing with the EU’s continuing ‘patchwork’ of truck sizes and loading rules, to the number of national tax and employment laws that could cause trouble for providers, notably Germany’s minimum wage requirement. Environmental legislation is also playing a bigger role in the industry, though the efforts to reduce CO2 emissions in readiness for this legislation depends on a number of factors.

Current trends in CO2 emissions from HDVs are unsustainable according to Dimitrios Savvidis, policy officer at the European Commission - DG Clima  “If you go back to compare 1990 and 2010 you see that emissions are estimated to have grown by about 36% despite the economic crisis that we all faced,” he pointed out. “HDVs account for about a quarter of all transport emissions and for are about 5% of the total EU CO2 emissions

Without action emissions from HDVs are expected to remain at best stable over the long term at 35% above their 1990 levels said Savvidis. Furthermore, he said there was a lack market transparency on HDVs in the EU, with no effective system of measurement for total emissions from heavy vehicles. The EC is now working on a vehicle energy consumption calculation tool (Vecto) measuring CO2 emissions from the whole vehicle.

“This is something that will be available in a couple of years and with this tool we will be able to measure CO2 emissions from the whole vehicle, not just from the engine,” said Savvidis

Beyond legislation, the push for a less toxic use of transport could be dependent on a more joined up approach to managing both inbound and outbound logistics, according to executives. For example, Daimler is strongly committed to finding ways of moving parts and vehicles in a way that reduces waste as long as it also proves to be cost effective, according to Jan Maes, manager of vehicle distribution for Europe. That is exactly what it has achieved in recent months with flows in and out of its Mercedes-Benz plant in South Africa.

Maes explained that the plant was fed with a lot of global inbound parts and materials but that 70% of the containers used to transport those volumes were coming back empty to Europe. Daimler is now shipping finished vehicles back in those containers. In doing so, the company has made savings on both the total cost for outbound vehicles and inbound parts because it received a rebate on using fewer empty containers.

Maes said that solutions like this depended on regional flows but that a greater willingness to study synergies across the inbound and outbound sectors could reduce both cost and waste. “These things should be looked at in more detail and it will become a reality as soon as we succeed in combining inbound and outbound knowhow and bring them together,” he said.

Emmanuel Arnaud, vice-president of commerce and marketing at Gefco, outlined a similar effort to use the same assets for inbound and outbound flows.

“We made some attempts in South America where we implanted convertible trucks with a top line of trailers able to carry cars because there is a big imbalance [in flows] between Argentina and Brazil,” he said. Arnaud added that, at the end of the day, cooperation with the carmaker in such operations is key.

“Maybe one day you win and one day you lose, so we have got to get acceptance from both parties,” he said.

Convertible Trailer Manufacturing Worldwide has a patented design for car carrying trailers that convert to flatbeds or a combination of the two to carry other cargo. Following an agreement signed last year, French vehicle trailer manufacturer, Lohr Industries, has signed a partnership agreement with CTM to build convertible trailers in Europe and other regions.

The company’s chief executive, Bill Pawluk, said that combining outbound and inbound flows was the way to reduce empty miles, which could waste as many as 8 billion litres of fuel per year.

Other companies are looking a number of practical ways to reduce emissions beyond combining vehicles and parts. Several executives pointed to the potential for alternative fuels, including electric vehicles. Dror Noach, vice-president of logistics services at CNH Industrial pointed to the introduction of LNG/CNG (liquefied and compressed natural gas) powered trucks in Europe as a way of reducing the levels of CO2 emitted significantly. Other carmaker executives expressed an interest, but indicated that fleet owners and legislation would drive such decisions.

“We are open to an opportunity but we are not investing in fleets, that is not our business,” said Laurent Kerloch, alliance general manager for global vehicle logistics at Renault-Nissan. “Any technology opportunity is good for us and should be broached by logistics providers. We will consider any opportunity if it brings value.”

Maximilian Altmann, chief executive officer at Germany-based ARS Altmann, stressed that an intelligent combination of transport modes could yield real results and, at least for now, be even more effective in reducing emissions than a change in fuel or road equipment.

“This combined is a big step forward for everybody,” said Altmann, whose company also owns a large fleet of rail wagons in central Europe. “I see from our customers a growing practical approach and this is what we can put in place and realise together. To look for alternative fuels and other things; that is good and necessary. But it is good to be efficient in getting to a good standard on emissions.”