Europe conference: Logistics need not be hampered by working towards a better planet 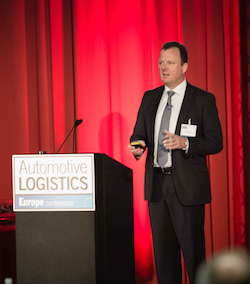 The automotive logistics industry needs to acknowledge its environmental record if it is to make amends and build more sustainable practices into the way it does business. Kai Kraass, chief operations officer at Wallenius Wilhelmsen Logistics (WWL, pictured), was looking for some honesty from the delegates at this year’s Automotive Logistics Europe conference in Bonn, Germany. He questioned the extent to which carbon and NOx/SOx emissions were a concern in any company’s performance reviews and budget plans.

“I would guess it is very little,” he speculated. “You talked about results, return of capital employed and growth rates, but you didn’t touch on the [emissions] figures; I believe this is wrong and we are all responsible.”

The extent to which environmentally sustainable logistics is ignored in the interests of cutting cost was evident in some figures that David Mayo, vice-president Europe automotive and industrial solutions, Chep, recalled from last year’s conference in Bonn. When delegates were canvassed on what factors came into play when OEMs or suppliers chose a logistics provider, 84% voted for finding the lowest cost, rather than looking for one that could guarantee lower emissions. Nothing has changed. A poll on the second day of this year’s conference asked what was most important factor when selecting a logistics provider. There was not one vote for sustainability. When asked whether OEMs were making carbon emission part of their supplier selection, 64% voted ‘not really’.

The issue of overcapacity in the ocean container sector was also to blame, according to Mazda’s Jorgen Olesen. “There is an overcapacity on the container trade and what do the shipping lines do? They say it is cheaper to run around the cape than go through the Suez canal because the bunker is so cheap,” he said. Even when companies do face up the environmental costs of their operations, it seems that it is quickly forgotten.

Kraass pointed to a project WWL had initiated in 2009 with two customers into the total emissions expended between the factory and the dealer. The results were clear but they did not factor into the companies' next RFQs. Today, WWL does not have any similar projects on the go.

“It is still a case of price first,” said Kraass, adding that to build a culture of sustainability the industry needed emissions transparency and a real environmental focus when issuing RFQs. Companies should be using purchasing strategies to drive this change.

“The environment should be part of the KPIs and annual review,” he stressed. “And we need incentive programmes.”

Of course, the automotive industry is incrementally cutting waste in its day-to-day search for greater efficiency, as Ford’s John Buchanan pointed out. “I would say we are all making our businesses more sustainable everyday in that we are tasked by process improvement, such as freight efficiency and packaging density and so on,” said Buchanan. “We don’t tend to think of them as sustainable initiatives, but the outcome is that we are becoming more efficient. So it is not that we don’t do anything.”

However, he acknowledged the industry needed to be braver in trying new things and making the sort of changes needed to bring significant improvement. The benefits are clear once change starts to happen. WWL has reduced sulphur emissions by 220,000 tonnes over the past 11 years, equivalent to the amount France produces in a year, according to Kraass. Furthermore, he said that WWL’s new ro-ro terminal at the Australian port of Melbourne, which goes into operation next month, will be the most environmentally friendly terminal in the world – something the company considers a real investment.

However, do these savings mean anything once continued growth in the automotive sector is factored in? WWL may have cut emissions by 2% in 2015, but its success in securing trade means it will be running more vessels. There is also the fact that the maritime logistics industry has new burgeoning automotive markets to serve, and is going to be defined by greater fragmentation in its trade lanes, meaning more ports, something Kraass acknowledged.

“Moving forward we see trade fragmentation coming in,” he said. “There will be more ports. Mexico for instance is one of the strongest export countries. We will have more volume and, if you look at the statistics, there is a significant increase, between 15-20% year by year.”

All the more reason, he said, to make an industry-wide concerted effort to tackle the issue and not ignore it. And as David Mayo pointed out, business opportunities need not be hampered by working towards a better planet.