Europe conference: Two-thirds of UK car manufacturing ‘could move to EU within a year’ 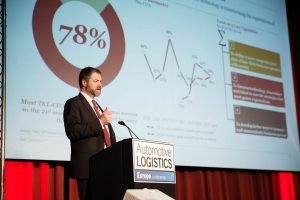 Up to two-thirds of the UK's automotive manufacturing base could theoretically be relocated to the EU within a year after the country leaves the trading bloc, global lead analyst at Autofacts PwC, Christoph Stürmer, has warned.

Speaking on the first day of the Automotive Logistics Europe conference in Bonn today (Wednesday June 7th), Stürmer (pictured) said the firm's estimates showed that 16.9% of the vehicles scheduled for manufacture in the UK between 2017 and 2023 could be moved almost immediately to a sister plant on the continent where the same vehicle was already being produced.

“A very good example is the Vauxhall/Opel Astra produced in the UK and in Poland. Shifting that capacity could be done in an instant,” said Stürmer. “Although the Polish plant's capacity is quite full, theoretically and logistically it would be quite easy to just shift the assembly.”

For another 49% of UK produced vehicles, Stürmer said there was a “platform sibling” being built on the continent.

“When you have two products built on a very similar platform, you will have the same or similar process, conveyor systems, measurements and suppliers,” he continued. “So basically shifting a product from one location to another when it has a platform sibling takes a year.”

While he said such a shifting scenario post-Brexit was unlikely, the structure of the local automotive manufacturing industry meant it was something government needed to bear in mind, ahead of the country's negotiated exit from the European Union.

“The situation could be very dramatic, but I am quite sure politicians, especially in the UK, understand that it is not good to keep the automotive manufacturers in an unsure state for very long, because decisions need to be taken and they need to be taken fast for the next product generation,” he commented.

The latest figures from UK industry body the Society of Motor Manufacturers and Traders (SMMT) show the country exported 1.35m cars in 2016 out of a total of 1.72m produced – almost 80% of production.

The UK exports to more than 160 countries worldwide, with the EU making up 56% of the total, followed by the US, China and Turkey.

At the same time, just 41% of the content that goes into making these vehicles was local at the last count.

“I have been looking around. I have really made an effort to try to find a major supplier that has a major operation in the UK and I haven't found it,” said Stürmer, adding that that while he had come across a number of just-in-time, just-in-sequence assembly shops near to the major car plants supplying parts such as seats and bumpers, he couldn’t see “any real heavyweight tier two suppliers in the UK”.

He said that given the large amount of imports and the shallow supply base, the UK seemed “more of a near shore final assembly operation, than a deep, grounded, automotive industry location”.

“That puts the UK, despite its glorious history, much more in the area of, say, Turkey or Morocco as a competitive location, rather than Germany, France or Italy with their deep-rooted automotive industry,” he said, adding that it was difficult to forecast the future of the country's automotive sector given the number of factors at play.

Stürmer went on to suggest that the weaker pound, which fell after last year's decision to leave the EU, was part of the reason that the country's car plants were currently “filled up to the brim”.

“Full access to the free trade area plus a low exchange rate makes it a very favourable assembly location,” he noted.

The favoured outcome PwC envisages for Brexit is the “South Korea scenario” which foresees a level of relatively flat production in the UK, favourable exchange rates and “some sort of exceptional regime for the automotive industry in order to avoid undue taxation”.

Stürmer said he did not see “a lot of capacity” being removed from the country but warned of the pace such change would occur at, if there was a sudden decision by OEMs to move production offshore.