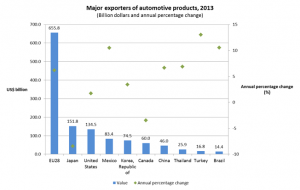 Latest figures show that the European Union has increased the export of automotive products indicating the importance of world markets for recovery – at least for the higher end brands – in a sector that has been dogged by sluggish sales within its borders since 2007. However, longer term, those exports could ease again as OEMs localise production in overseas markets and, in terms of finished vehicles, there has been an overall dip in exports in the first half of 2014 because of declines in certain key markets.

The most recent international trade statistics from the World Trade Organisation (WTO) show that the European Union’s share in exports of automotive products rose 49% in 2013. EU exports to the rest of the world increased by 6%, above the global average of almost 4%, and were worth $678 billion. The annual percentage change was 7% on 2012. This rise comes after a fall in 2012 to below 50%, the first such drop in more than a decade.

The top ten world exporters of automotive products did not change position in 2013 according to the WTO statistics. Following the EU at the top were Japan ($152 billion), the US ($83.4 billion) and Mexico ($74.5 billion). The Republic of Korea came in fifth at $60 billion followed by Canada, China, Thailand, Turkey and Brazil (see graph for figures). However, it was Turkey that showed the highest growth rate according to the WTO figures, with an increase of 13% in 2013 worth $2.1 billion, followed by Brazil and Mexico, which both had growth rates of 11%. Japan’s export growth rate dropped by 8.5% and Canada’s by 3%.

For the same period figures from the European Automobile Manufacturer’s Association (ACEA) show that the EU exported almost 5.9m passenger cars compared to just more than 5.7m in 2012. Combined with commercial vehicle exports the region had total exports of more than 6.6m units. That equalled more than €123m ($192.5m) in terms of value. However, there has been a decline in exports to certain key markets between January and August this year. While exports to the US, China and South Korea were up, there have been notable declines in vehicle exports to Turkey and Russia. For example, exports to the US were up to more than 976,000 in the first eight months of 2014, from around 916,700 over the same period in 2013. By contrast, exports to Russia dropped almost 123,000 from almost 480,000 over that period last year to around 357,750. Overall exports from Europe to the top 15 countries were down 245,500 between January and August this year. That said, the rise in exports to China and North America have been significant for the European market.

“Exports of fully built vehicles have provided a clear positive for the European vehicle manufacturing sector,” said Mark Fulthorpe, director of Global Light Vehicle Production at IHS Automotive. “Indeed without robust exports to China and North America the situation would have been much less appealing, as Western European sales of light vehicles declined from 2007 for six straight years.”

However, Fulthorpe was careful to add that not all manufacturers have enjoyed the export boom from which the premium German makers and more recently Jaguar/Land-Rover have benefitted.

“Higher-volume, more generalist makers have been more constrained by their exposure to Western European markets, which are showing signs of a tentative recovery this year,” Fulthorpe told Automotive Logistics.

Moreover, Fulthorpe said that the mid to long-term trend is expected to see the pace of exports from Europe start to ease as carmakers increasingly localise their efforts in China, a clear and obvious trend, but also as they look to the US and especially Mexico to serve domestic–NAFTA demand and to export from that base.