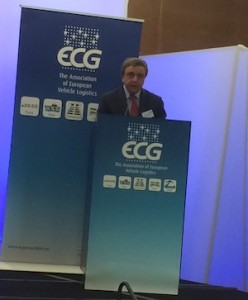 Vehicle sales growth across Europe in the first quarter is up more than 7% according to industry analyst LMC Automotive, with all major markets outside of Russia having made progress at the beginning of 2015. And it is likely to stay that way this year. The reduction in oil prices, the depreciation of the euro, which is abating deflation, and Europe’s quantitative easing programme, which is worth €60 billion ($67.75 billion) a month, are three factors that have improved borrowing and helped to boost consumer confidence.

The knock-on effect is that transport providers are currently seeing a growth in business for the movement of vehicles in the region and for export. Along with solid rises in the largest European markets (Germany, the UK, France, Italy and Spain), a number of smaller are showing strength: Turkey has seen a sales growth of 23%, while the Czech Republic is up by 11%, with Poland showing a sales growth of 7% according to LMC figures.

However, the expansion may be limited both in terms of regional sales, which is going to stabilise at around 3% per year up to 2020, and exports, which are on a declining growth trajectory. At the same time, according to the Association of European Vehicle Logistics (ECG), car carriers are facing a lack of capacity to handle present volumes, and they are still struggling to reinvest in new equipment.

“We are now facing a lack of capacity in the market [hindered] by the lack of investment by logistics providers because of the low resources this sector has,” said the ECG’s president, Costantino Baldissara (pictured), at the Association’s recent Spring Congress and General Assembly in Portugal. “We need to build up our future but there is the need for new investment. According to ECG estimates, over the next years we will we need more than $2 billion in investment just to adapt the sector to the recent increase in demand.”

The question is whether that investment will be available long-term because, while first quarter results produced by the global forecasting analyst Oxford Economics are robust, the indication is that this may be more of a temporary burst of activity rather than a structural return to growth.

Oxford Economics has teamed up with automotive analyst, LMC Automotive, on the Advanced Automotive Program, a decision-support tool for automotive industry executives, consultants, analysts, and investors. LMC Automotive’s head of European Production, Justin Cox, was at the ECG Spring Congress.

“This is a burst in activity – what [Oxford Economics] calls a sugar rush – of all of the positive consumption growth elements coming together in that one quarter,” said Cox. “They won’t be additive in the next quarters. Oxford Economics believes that GDP growth will temper going forward. We are looking at GDP growth performance of about 1.7% for 2015.”

Production in Europe is be at 18.9m this year showing a modest 3.4% growth, according to LMC Automotive.

Likewise, while European exports are strong to the key markets of China and the US, the trajectory of that growth is in decline. This is influenced by key exporters expanding domestic capacity in those export markets. Volkswagen and Audi, Mercedes Benz and BMW, for example, will expand capacity in North American by 700,000 units between this year and 2020 according to LMC Automotive. Domestic production by those carmakers in Asia will grow by more than 600,000 over the same period.

That said, there are also prospects for European logistics providers as carmakers repatriate a number of brands and rejuvenate their model range closer to home. Investment in production was on hold but over the next two years there will be a boost to that investment, according to Cox.

Fiat Chrysler Automobiles, for example, is set to grow most in its Europe base. The Jeep Renegade is being made in Italy for export to the US and the Fiat 500, which is made in Mexico for North America, will be exported from Poland, to take two examples.

Overall, however, pan-European production will move slowly according to Cox, largely because of Russia, but as it recovers and products are renewed it looks likely that by 2020 there will be 3.3% growth.

So while the European market remains in modest health carmakers and their logistics providers will have to continue to keep an eye on margins and global production trends change.

“Many variables will define our business in the near future and many opportunities will materialise,” noted Baldissara. “In this context the finished vehicle operators will have to remain focused on their business but also look substantively at several changes.”