European ro-ro providers could benefit from fresh investment in Africa by Chinese and European automotive manufacturers, according to speakers at this year’s Euro-Med convention, held by Grimaldi Group in the Greek capital of Athens. 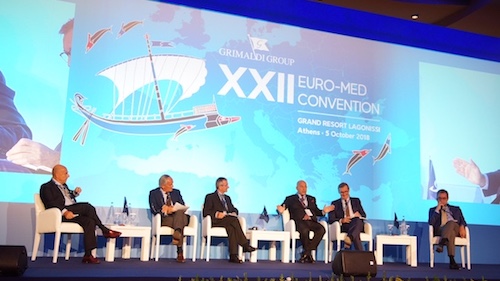 Chinese manufacturing investment in Africa, in particular, could provide a boost to business for ro-ro-providers, said Ennio Cascetta, MD of Rete Autostrade Mediterranee (Ram), a division of Italy’s Ministry of Infrastructure and Transport focused on the promotion of the Motorway of the Seas (MoS) initiative.

“We always think about China and Europe in terms of deep-sea connections and rail, but China is also investing hugely in Africa and over the last five years has invested $53 billion in manufacturing plants there,” said Cascetta.

China’s efforts to exploit offshore manufacturing in the country were already well developed, he noted, adding that in the future, goods made there would be going back to China, as well as being transported by sea to customers in Europe.

“The potential for new ro-ro services is very high from North Africa but also from Sub-Saharan Africa,” said Cascetta. “I would keep a keen eye on the development of Chinese investment in Africa as a potential market for the ocean services providers.”

But according to Grimaldi’s MD, Emanuele Grimaldi, Chinese investment in Africa is more of a threat to European companies than an opportunity. Grimaldi suggested automotive investment from established European carmakers could instead offer the greatest potential for ocean trade to and from Africa.

Grimaldi said it was China’s involvement in Africa that companies in Europe needed to keep an eye on, if they were not to lose historical trade links with old colonies, citing the existing strength of links that France had in Africa as just one example.

Grimaldi said there was no real sign of the development of automotive trade by the Chinese in Africa for export to Europe but did note that more vehicles, machinery and heavy equipment was turning up in the country from the Far East, including from China itself.

While not a focus for discussions in Athens, it does indicate growth in demand for deep ocean services carrying vehicles and high and heavy cargo between China and Africa.

Investment in AfricaWhile the level of automotive manufacturing in Africa by Chinese companies remains low at the moment, there is potential for parts and knockdown kit supply to and from the country, but it is European companies that are showing a stronger investment trend here, and not just in North Africa.

In August, Volkswagen signed two agreements with the governments of Ghana and Nigeria, for example. The German carmaker is planning an assembly plant in Ghana and the development of a sales and service network there. In Nigeria, meanwhile, the carmaker has greater aims and has committed itself to turning the country into an automotive hub on the western coast of Africa over the long term.

VW also started local assembly in Rwanda in June and has an established plant in Kenya, in addition to its plant in South Africa.

FAW also has a truck plant in South Africa, run under its subsidiary, FAW Vehicle Manufacturers, but has also set up Perfection Motors in Nigeria with the Lee Group for the production of trucks from imported semi-knockdown kits (SKDs).

Investment in portsChinese companies have also been making big investments in European ports over the last few years, driven by the country’s Belt and Road trade initiative, which seeks to build trade links and cooperation with international markets, including those in Europe. Eleven EU member states have so far officially joined the Belt and Road project.

One of the biggest investments was when the Greek government sold a 51% controlling stake in Piraeus Port Authority (PPA) to China’s Cosco Group in 2016 for €280.5m ($311m). Cosco has been operating two container terminals at Piraeus since 2008 but the purchase of the controlling stake has allowed it to invest more in technology and infrastructure upgrades. The investment indicates how strategic the company considers the port to be and it has increased trade by 300%. At the same time however, it caused controversy earlier this year by raising vehicle handling fees by 34%. PPA defended the increases, stating that it had not previously raised rates for a decade and that the rise would not apply to 75% of traffic passing through the Greek port.

Grimaldi said investment like this was vital to infrastructure at the ports and that the support for trade was important as long as the ports involved did not have a politically strategic or military value.

“It is important to make sure in commerce that you reciprocate the same type of laws and conditions, and it is not one-way,” he said.

In terms of its own investment in infrastructure, Grimaldi has plans to expand on the footprint it has at the ports of Valencia and Barcelona in Spain to accommodate the rise in Fiat and Ford traffic and also plans to use bigger, more efficient ro-ro vessels to support that trade.

“In Valencia, we have been so successful with the Fiat distribution and the Ford exports that we have had to take room at the port of Sagunto, because there was no space left in Valencia,” said Grimaldi. “All the space that is there is used by us and we [are looking at] multilevel car storage [at both] Valencia and Barcelona.”

Grimaldi first announced its intention to build a multilevel vehicle storage facility in Valencia back in 2016.