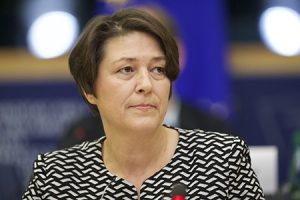 Violeta Bulc, the European commissioner for transport, has urged the finished vehicle logistics sector to work with the European Commission and EU member states to push for legislative reforms and policies to support better use of developing technologies.

Speaking at an event marking the 20th anniversary of the Association of European Vehicle Logistics (ECG) in Brussels this week, Bulc stressed that digitalisation would be vital to the success and survival of transport and logistics companies, even if many of their processes today were still manual.

“Digitalisation is not just changing the economy, it is also changing transport,” she said. “You cannot ignore the potential that new technology and ‘industry 4.0’ represents for the sector, including blockchain databases, truck platooning and autonomous driving.”

Bulc highlighted that the European Commission’s Directorate General for Mobility and Transport (DG MOVE), which she spearheads and is responsible for improving trans-European logistics networks, interoperability and cross-border connections, had put digital communication and technology at the heart of its policy objectives.

That includes far-reaching ambitions to create an open data exchange across Europe’s multimodal transport networks to turn them into “ecosystems”, with access to data that can help improve safety as well as reducing emissions and traffic. The commission is also accounting for autonomous driving and connected-vehicle technology in legislation on logistics corridors.

Bulc and the commission are also focused on more immediate objectives that would also be of practical use to vehicle logistics. She admitted that when she started her term as transport commissioner she was surprised at just how “undigitalised” much of the sector still was, particularly in areas such as billing paperwork and toll collection.

In moving towards a ‘digital single market’, Bulc promoted the use of a digital tolling solution applied across Europe.

“With digital tolls, a truck would be able to pass through multiple member states and highway networks and pay [tolls and road charges] automatically without having to carry five or six electronic boxes in the truck,” she said.

She also reiterated the importance of more EU member states adopting the e-CMR (electronic consignment note) protocol, which allows for electronic filing of legal transport documents and billing. Late last year, France and Estonia joined just nine other members of the EU, along with Switzerland, in adopting the protocol.

Notable absentees to the e-CMR include Germany, which is one of Europe’s key transit countries as well as its largest economy and vehicle market. Bulc said she would like to see all EU member states adopt the protocol by the time her term ends in 2019.

She also said increasing multimodal logistics was a priority for the transport commission; the finished vehicle logistics sector, with its relatively high use of rail and short-sea shipping, was an example for much of Europe, she noted, but there were still many missing links, both in infrastructure as well as digital communication and documentation between modes.

“We are going to make 2018 the year of multimodality in the EU, in which we will focus on finding and addressing missing links,” she promised.

Bulc stressed that implementing digital technology into both regulations and operations required cooperation and communication across industry and policymakers and urged executives to engage with the commission and national governments about what they needed to improve their business. “It should be you [the transport industry] pushing us [the EU] to change and adapt new technology, not the other way around,” she said.

'Don’t walk away'Bulc did not address the UK’s exit from the EU or its forthcoming negotiations between the two over a new trading relationship, which will affect the way logistics companies operate in both markets. But she lauded the European model and the progress made through liberalising reforms, including the EU’s ‘open skies’ agreement for air travel and the recent 4th railway package, with their focus on competitiveness and interoperability.

She urged executives and governments not to “walk away” from 60 years of cooperation, which had above all promoted peace and prosperity across Europe, she said.

“If you walk away, you sacrifice the fundamentals for peace,” said Bulc, a Slovenian native. “If we pull together, I’m not afraid for Europe, or for your industry’s future.”

Such fundamentals, she said, must remain the priority ahead even of economic development. “First comes peace, then the single market.”