Faurecia: The power of four into one 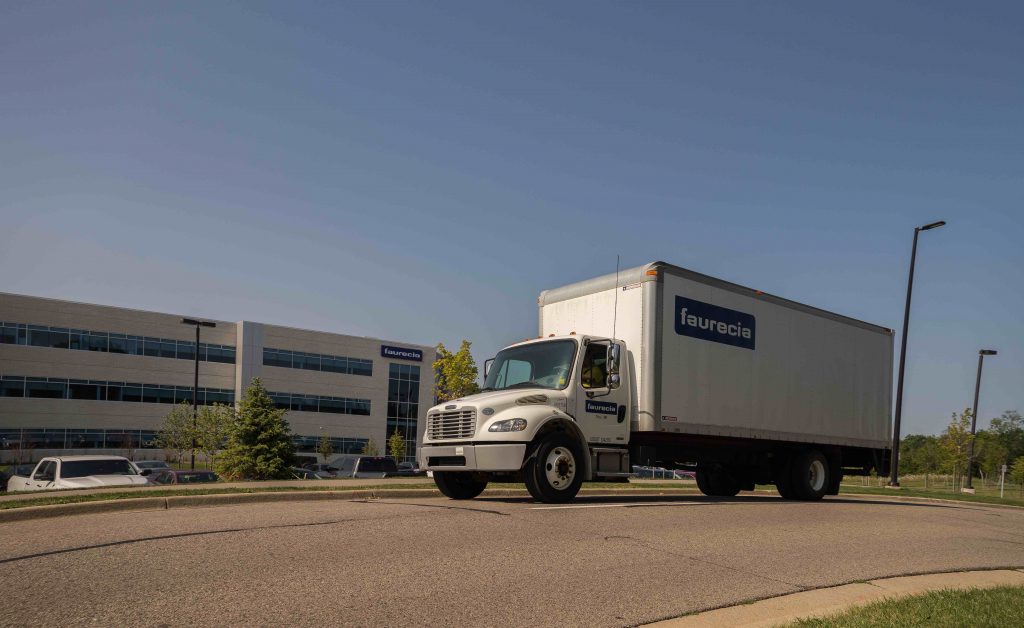 Tier one supplier Faurecia is consolidating its North American logistics network in a bid to reduce logistics costs, optimise its networks, and build better relationships with carriers

Faurecia, based in Nanterre, France, is among the world’s largest tier suppliers, ranking seventh globally for 2014, according to the latest Automotive News list of global suppliers. Still majority-owned by PSA Peugeot Citroën, the company has in recent years made major moves in North America – where PSA has no manufacturing presence – through a number of major acquisitions. Among tier suppliers on the continent, it now ranks eighth by revenue with $6.2 billion, ahead of Delphi Automotive. And as new vehicle production in the US and North America continues to head towards record levels – perhaps breaching 20m units across the continent by 2020 – it is naturally presenting suppliers with renewed opportunities to expand. Faurecia has plans to seize the moment.

Patrick Bauer, vice-president logistics and supply chain at Faurecia North America, based in Auburn Hills, Michigan, has been at the company since earlier this year, following more than 20 years in automotive logistics management at an American OEM and tier one supplier based in Michigan. Bauer’s previous automotive logistics experience has provided some insight into the current issues facing Faurecia. He has managed logistics both at a regional and a global level, achieving savings through consolidating logistics networks – a success he now hopes to bring to Faurecia. Especially because the company, like other component and module suppliers, is a product of previous mergers and acquisitions, with a considerable amount of decentralisation.

A time to combine

Back in 2013, Marc Louwerse, then transport logistics and packaging commodity director at Faurecia Interior Systems, based in Nanterre, told Automotive Logistics that, alongside global expansion, building a global supply chain management organisation – whether at a group or divisional level – would be an important part of the company’s logistics management. He said this would involve integration across purchasing and operations, and a more integrated IT and communications system. That is in some ways now the plan that Faurecia seems to be putting into action in North America. 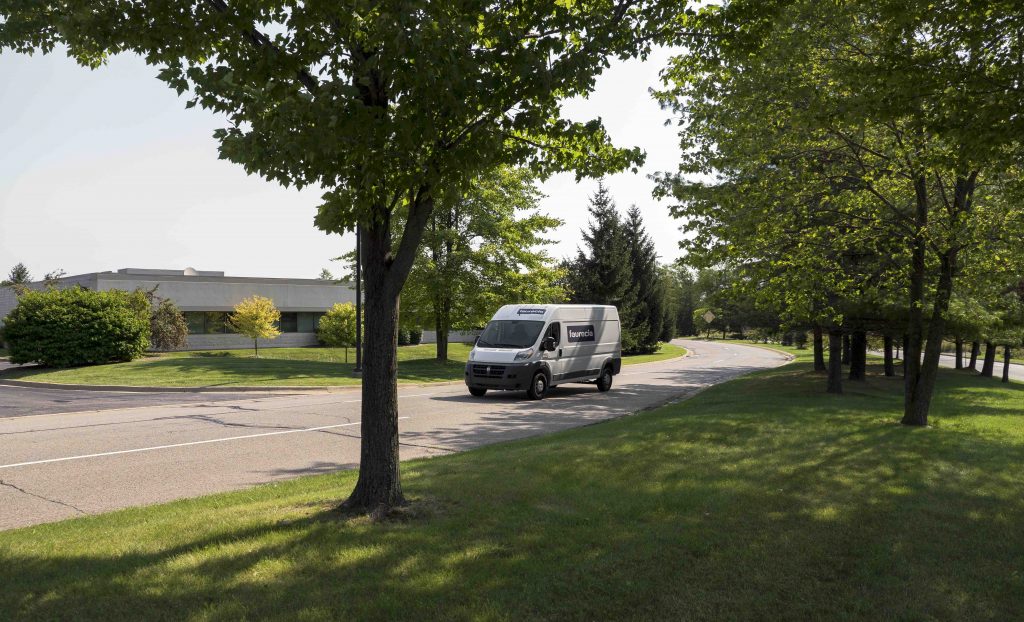 Bauer is in the process of reorganising Faurecia’s logistics network across the continent, with the hope of improving operations and reducing costs. Currently, each Faurecia division manages its own carrier selection, procurement and contracting, tracking and tracing, and freight auditing processes. However, he wants to change this silo approach.

“Within the past five years, our transportation spending has doubled. In fact, it has grown so large that it is now time to combine operations,” Bauer says. “We were division focused, but now we need to look regionally – especially for transportation. This strategy has stemmed from the growth of different suppliers and different manufacturing sites throughout our network in North America.”

Bringing Faurecia’s four divisions together in North America is now a significant priority for the company, especially as many of its plants and parts-handling locations are located in close proximity. Bauer says that Faurecia’s North American supply chain has grown to supply a larger manufacturing footprint, supply base and customers. Thus, it presents many opportunities for consolidation and better route engineering.

One important area will be consolidating its carrier base across divisions. Using a more common set of carriers – a process the company has already begun – allows Faurecia to achieve better delivery performance, and to negotiate competitive rates. It could also help it to overcome what is currently a growing logistics capacity shortage in North America for the company.

“As we consolidate and synchronise our North American transportation network, we are seeing transportation savings and transit time reduction opportunities for both our northbound shipments from Mexico and our southbound lanes to Mexico, by consolidating shipments from several suppliers to our plants and using full truckloads to achieve economies of scale,” Bauer says.

A view of the network

Faurecia manages its logistics directly, but outsources management of all its logistics facilities, including crossdocks (particularly at Mexican border locations such as Laredo, Texas), consolidation centres (notably in the Midwest), and warehouses to logistics providers including Carter Logistics, CH Robinson and Ryder.

Faurecia’s North American logistics spending is relatively evenly split between divisions, except for Automotive Exteriors, which represents just 3%. Its inbound network in North America accounts for 90% of total freight expenditure, while outbound, most of which is handled by carmakers ex-works, represents only about 10%, primarily from JIT shipping from the seating division to OEMs (seating facilities are typically onsite or very close to assembly plants). Faurecia’s primary transport mode is full-truckload (FTL), accounting for 47% of its transport spend. This is followed by milkruns, consolidations, and less-than-truckload (LTL) deliveries, each accounting for 20%. In future, it will try to reduce LTL freight and move to consolidated shipments. 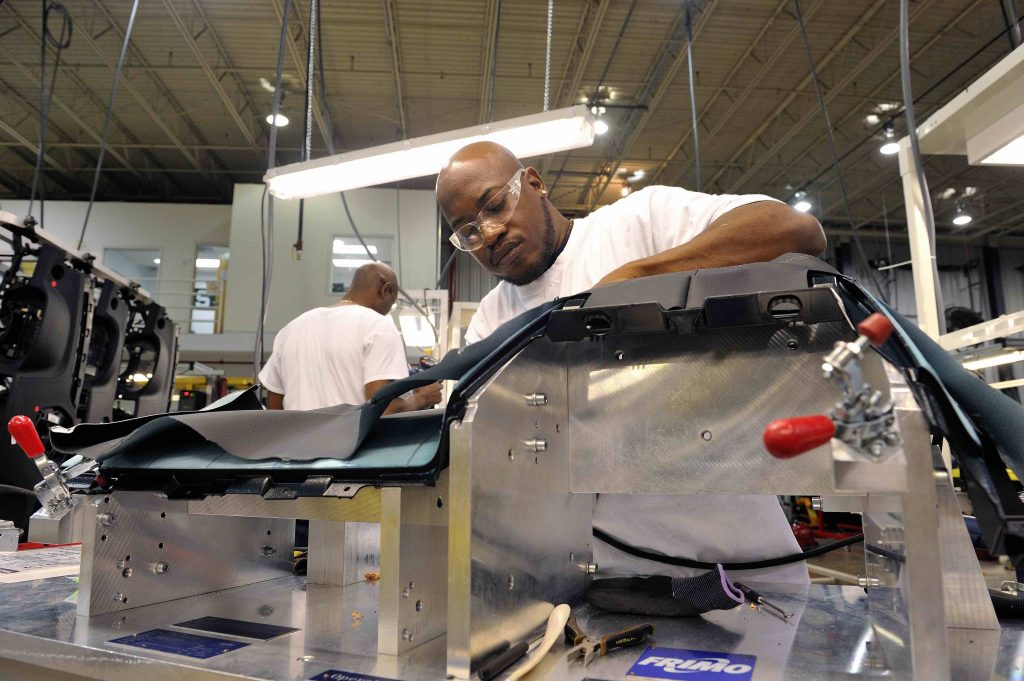 “We want to minimise LTL freight and move to truckloads or milkruns, or, if not, consolidate moves such as small LTL shipments to a consolidation point and then to the plant,” says Bauer. The company also plans to use a national LTL provider.

Around 71% of Faurecia’s current freight spending for North America is within the US and Canada, and 20% is in Mexico, a figure that includes intra-Mexico suppliers shipping to plants, plant-to-plant shipments in Mexico, southbound freight from the US border, as well as northbound from plants and suppliers in Mexico to the US. Faurecia’s cross-border flows have risen substantially, and Bauer sees opportunities for consolidation.

“Divisions manage the border crossing differently, so we are working on achieving commonalities – by either combining shipments into an existing southbound network or by creating consolidations and then a deconsolidation point north of the border such as in Laredo, Texas or Arizona for shipments to Mexico,” he says. Faurecia has also added a Memphis deconsolidation crossdock.

Faurecia uses ocean for 9% of its shipments, which represents most of its overseas material used in North American production; it also uses a small amounts of air, courier, and intermodal transport. “We currently use very little truck and rail intermodal transport, although we do see some opportunities,” Bauer says.

Overseas shipments is an area where Faurecia is experiencing increasing interest and growth. Bauer says that Asia and Europe are both becoming more significant supply sources for the company in North America.

Big savings by working together

Bauer’s objective is to merge Faurecia’s North American network between divisions over the next two yaers. He believes the result will create more balanced transport modes and increase shipping frequencies, along with reducing in-transit times.

Bauer outlines aggressive ambitions for reducing Faurecia’s overall logistics costs and improving operations over this two year horizon. He points to several major areas of focus: network optimisation and compliance; a consolidated carrier panel; achieving a higher pack density and an increased return packaging ratio. “We expect to see a 10% reduction in transportation spending in 2016 and another 10% reduction in 2017,” he says. 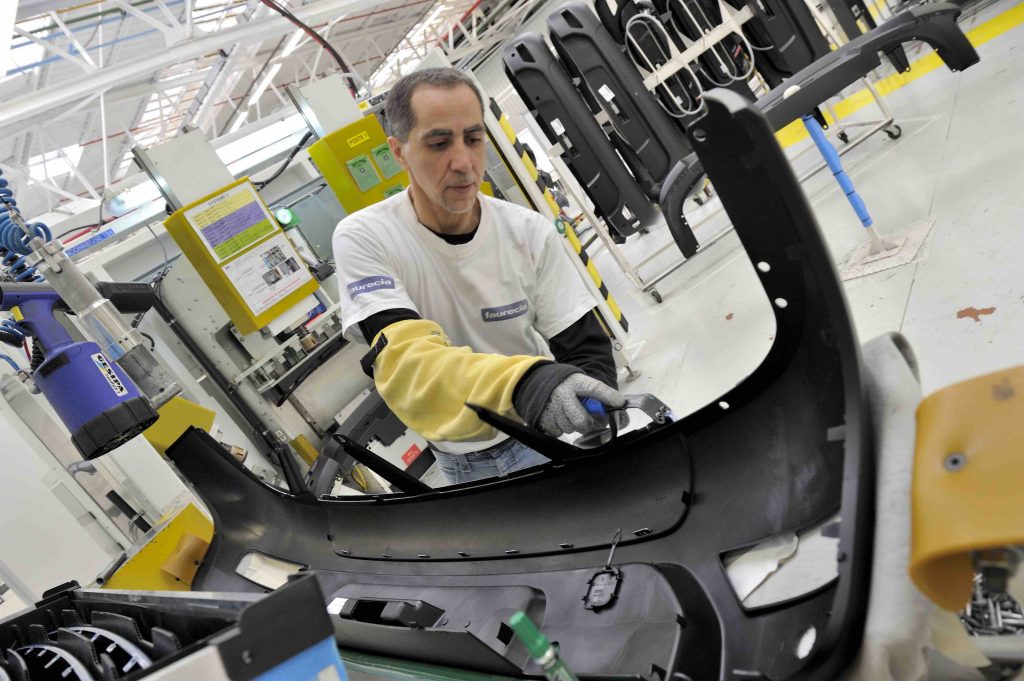 He also sees scope to improve the amount of returnable packaging across Faurecia’s network thanks to sharing across divisions: “We are looking more at collapsible containers and inserts.”

Where Faurecia has already begun integrating business units, it has achieved lowered costs and inventories. Faurecia Emissions Control Technologies, for example, has reduced its logistics spending by more than 30% over the past two years, while its inventory velocity has increased by 8%, and the number of delivery routes has been reduced.

With the growth across Mexico and cross-border material flows to and from plants in the US, combining Faurecia’s divisions is also expected to reduce costs for all cross-NAFTA flows and especially at the border.

“As we consolidate and synchronise our North American transportation network, we are seeing transportation savings and transit time reduction opportunities for both our northbound shipments from Mexico and our southbound lanes to Mexico by consolidating shipments from several suppliers to our plants and using FTL to achieve economies of scale,” says Bauer.

Earlier this year, Faurecia also started the process of forming a common carrier panel designed to use the same providers across divisions. Not only does this approach lower costs, but Bauer hopes it will improve relationships with carriers (as those who work with the company will have more work) and help delivery performance.

Over the past two years, the tier one has already cut its carriers by 50% to between 100 and 140, but as each division has its own preferred group of providers, it can be difficult to agree on the cuts. In the next step, Bauer says that Faurecia plans to create a North American transport commodity strategy, which will establish criteria for evaluating KPIs, and managing tracking and tracing across all carriers. Such a system should also help the company to make better decisions when rationalising its provider base.

No one said it would be easy

However, some issues, mainly out of Faurecia’s control, are affecting its ambitions for consolidation. Truck driver shortages and a tightening of truck capacity, especially for long-haul moves, are forcing the supplier to be more disciplined and compliant in enforcing time windows and truck turnaround times. The west coast labour disputes late last year and earlier in 2015, along with a growing port congestion on both sides of the country, have also led Faurecia to use more costly air freight alternatives.

“We are beyond labour concerns now, but port congestion is still an issue – particularly on the east coast,” Bauer says.

He also recognises that the complete combination of the carrier and logistics network will come with its challenges, perhaps especially in working with providers: “Combining the transportation network and expenditures will be new for us. The North American network management and spending has been a hybrid of 3PL-managed, centrally managed, and some plant managed units.”

Faurecia currently uses 3PLs in its four divisions, and has two freight audit providers. According to Bauer, his previous experience at manufacturers had showed him the value that 3PLs can bring to a large tier one. However, he notes challenges among some providers in meeting specific logistics requirements and a failure to meet growth needs. “Incompatibility of information systems with 3PLs is a challenge, for example,” he says.

Nevertheless, he sees scope to increase the use of 3PLs for Faurecia, especially for more value-added services. “As we define our North American transportation strategy, we will be considering the use of 3PLs,” reveals Bauer, “in areas that include network design and optimisation for the US and Mexico, network management and compliance, transportation management systems, alert management through tracking and tracing, and possibly freight procurement and contracting.”