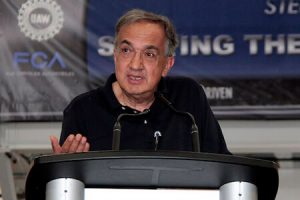 Sergio Marchionne (pictured), who was CEO of Fiat Chrysler Automobiles (FCA) until earlier this week, has died just days after undergoing surgery at a hospital in Zurich, Switzerland. No further details surrounding his death have been disclosed.

Marchionne was the CEO of the joint venture carmaker since its formation in 2014 (following a gradual takeover by Fiat of the US carmaker that began in 2009 when Chrysler went bankrupt). Prior to that, he was CEO of Fiat. He was also head of Ferrari, SGS and CNH.

His death follows what were described earlier as “severe complications” following the surgery last week.

Earlier this week, Mike Manley took over as CEO of the carmaker after it became clear that Marchionne would not be able to return to work. Manley, who will now be appointed to the executive board as well as becoming chief operating officer (COO) of the Nafta region, has been head of the Jeep division since 2009 and head of the Ram division since 2015. Prior to those roles, he was COO for the APAC region and led Chrysler activities outside of Nafta.

Manley will now work with the management team at FCA to implement the company’s 2018-2022 Business Plan, which was announced in June and includes research and development of connectivity technologies to offer telematics services across the FCA product line-up and the development of digital technologies to be deployed in manufacturing processes.