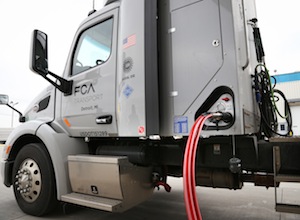 Fiat Chrysler Automobiles (FCA) has revealed further details about its move to convert its diesel-powered truck fleet in Detroit to run on compressed natural gas (CNG).

As first reported at the end of November, the carmaker recently held an event at its Lynch Road facility in Detroit to announce the conversion. At the event the company said it had spent two years on a $40m project to convert 179 tractor units from diesel to the alternative fuel. The carmaker said it had made the switch because CNG is less expensive than diesel and generates fewer emissions. It gives FCA the largest private fleet of CNG-powered heavy-duty vehicles in the state of Michigan, according to a statement from the company.

The trucks are used to haul parts to assembly plants from suppliers and FCA US component facilities. Prior to the changeover, the FCA Transport Detroit fleet used nearly 2.6m gallons of diesel fuel per year while driving about 16m miles to deliver the parts. It said expects net fuel cost savings of about 35% per year with the CNG-powered fleet. The carmaker also said that it estimated the Detroit fleet’s transition to CNG would reduce CO2 emissions by more than 16,000 tons per year.

“Our transition to CNG reflects the way FCA US attempts to balance our search for profitability with social responsibility and community development, including environmental stewardship,” said Steve Beahm, senior vice president – Supply Chain Management, FCA – North America. “This project was a win-win-win – it offered a solid business case, clear environmental benefits and an opportunity to invest in our Detroit facility and workforce.”

Part of the investment saw $1.8m on upgrading its maintenance centre and $5m on the installation of a CNG refuelling station at its FCA Transport operations at Lynch Road centre near Detroit City Airport. The refuelling station, designed and built by TruStar Energy, is the largest private CNG station in North America said FCA.