FCA invests over $10m in Mopar PDC in Michigan 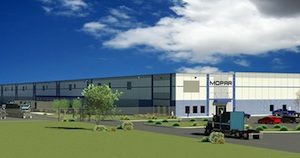 Fiat Chrysler Automobiles (FCA) is investing $10.4m in a parts distribution centre (PDC) that will handle aftermarket parts for its service, parts and customer-care brand, Mopar.

Work has already begun on the 46,500 sq.m facility, which is located in Romulus, Michigan, and is scheduled to open in the third quarter of next year. FCA said it would ship 45m items a year through the centre. Thirty inbound trailers will call at the facility daily and FCA will dispatch 40 outbound trailers a day. The centre will operate across two shifts.

It is the second Mopar PDC to be announced this year. Work is already underway on another facility in Winchester, Virginia, which is due to open at the beginning of 2017.

When the Romulus facility opens later that year it will bring the number of Mopar PDCs in North America to 23. Globally there are more than 50 Mopar PDCs and 25 customer contact centres.

“With the start of preliminary work on the Romulus PDC, along with the new facility underway in Virginia, FCA US will have invested a total of more than $22m in these two new PDC projects,” said Pietro Gorlier, global head of parts and service for Mopar. “These facilities confirm FCA’s continued commitment to customer service and will strengthen the Mopar supply chain, both in North America and also globally.”

In a statement, FCA said the new PDC would be launched under its World Class Logistics methodology, which it said established a synchronised supply chain “that progressively eliminates waste through an approach of continuous improvement”.

The centre will also be certified under the Leadership in Energy and Environmental Design (LEED) programme. LEED is administered by the US Green Building Council and is designed to define, measure and validate green buildings.

Fiat and Chrysler integrated their parts and aftermarket services under the Mopar brand, which was originally a Chrysler service, in 2012.