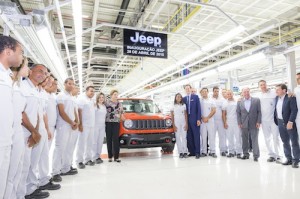 Fiat Chrysler Automobiles (FCA) has this week opened its new $2.4 billion Jeep production facility in Goiana, in the state of Pernambuco, Brazil. The company said the plant was built on high standards of efficiency, quality and performance and was one of the most advanced in terms of production processes and logistics.

Three billion Brazilian real ($1.3 billion) has been allocated for the 260,000 sq.m assembly plant and 2 billion real for the supplier park, with the remainder for product development and other investments.

The assembly plant has an installed production capacity of 250,000 vehicles per year and can produce up to three different models at the same time. It is currently producing the Jeep Renegade for export to markets across Latin America.

Brazilian president, Dilma Rousseff, attended the opening ceremony along with the governor of Pernambuco, Paulo Câmara, and the chairman and CEO of FCA, John Elkann and Sergio Marchionne.

"In my decades of international experience, the revolution here in Pernambuco is the most profound I have ever seen," said Marchionne. "It began five years ago when we had the vision of creating one of the most competitive plants in the world in the middle of a stretch of sugar cane fields. Then, step by step, the people here made it a reality."

The carmaker said it expects to employ more than 9,000 people at the site by the end of the year, including 3,300 at the Jeep plant, 4,900 employed by suppliers and around 850 in service activities.