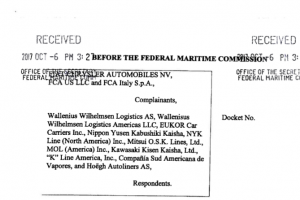 Fiat Chrysler Automobiles (FCA) has sent a complaint to the Federal Maritime Commission (FMC) seeking damages from six shipping companies it says acted to suppress competition for ro-ro services it purchased along with other carmakers.

The move follows action taken by the US Department of Justice (DoJ) after an investigation into price-fixing for finished vehicle services that started in 1997 and was carried out on an international scale. The shipping companies involved are CSAV, Höegh Autoliners, K-Line, MOL, NYK Line and WWL/Eukor. Each was charged with conspiring to agree on prices, allocating customers, agreeing to refrain from bidding against one another and exchanging customer pricing information. Five of the companies have already paid a combined total of $255m in fines.

In the complaint sent to the FMC made public this week, FCA said it wanted to recover reparations and the cost of the lawsuit for injuries resulting from the shipping companies’ violations. “None of the fines respondents and their co-conspirators have paid have compensated FCA or the other victims of their illegal activity,” said the carmaker.

FCA also said in the letter that “[r]espondents carried out their conspiracy by entering into contracts and other agreements with FCA and charging FCA anti-competitive pricing, resulting in FCA paying far more for the roll-on, roll-off cargo shipping services than FCA would have in a competitive market.”

Furthermore, FCA claims the respondents’ violations of the Shipping Act “continue to this day” because they are continuing to charge FCA fees that were set as a component of the previous agreements.

“The former and current contracts and agreements contained prices that were negotiated in an anti-competitive market and, therefore, artificially inflated and supracompetitive, as a direct result of respondents and their co-conspirators’ illegal, secret and unfiled agreements.”

Previous attempts by carmakers to seek damages through lawsuits filed with the federal courts have so far failed.

The shipping companies in question have yet to make a statement on the FCA complaint.