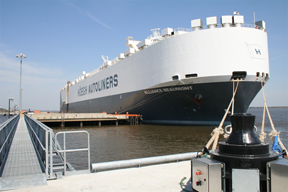 Fiat Chrysler Automobiles (FCA) has signed a contract with Autoport for the export of vehicles from the port of Wilmington in Delaware to the Middle East. Beginning this month (March) the port processor will begin handling volumes of Chrysler, Dodge, Jeep and Ram vehicles. The vehicles are being made at FCA’s plants in Michigan, Illinois and Ohio in the US, as well as at Ontario in Canada.

The contract marks a rerouting of exports to the Middle East that were previously moved out of the port of Baltimore.

“FCA US made the decision to use the Wilmington port based on Autoport’s expertise in handling Middle East exports for other OEMs as well as a strategic alignment with deep sea ocean carriers,” said Bill Cook, head of logistics and customs, FCA US. “The expansion of our export operations is important to FCA US as we continue to increase distribution of finished vehicles worldwide.”

The vehicles are being shipped by rail from the plants to Wilmington and prepared for export by Autoport. Deep sea transport providers Liberty Global Logistics and Höegh Autoliners will be shipping the vehicles from the port to the Middle East.

In addition to being a port processing company, AutoPort provides value-added services for exports from the US to the Middle East region.

Neither FCA nor Autoport confirmed the number of vehicles being exported but along with its existing GM export activity out of Wilmington, and the movement of privately owned vehicles, the FCA business will bring Autoport’s handling to between 70,000-75,000 units a year.

“The decision by FCA US to export cars through the port of Wilmington is a big win for the port and the state of Delaware,” said US senator Tom Carper. “In October of 2012 I had the pleasure of hosting the FCA US logistics leadership in Delaware and taking them on a tour of our port. That visit spurred a relationship between FCA US and Autoport that is responsible for the agreement announced today to FCA North American-made vehicles from the port to overseas markets each year.”