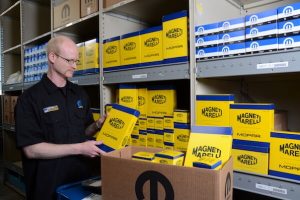 With combined revenues of €15.2 billion ($17.6 billion), the newly combined Magneti Marelli and Calsonic Kansei will be the world’s seventh largest global independent automotive components supplier, according to FCA and CK.

FCA has also agreed to a multi-year supply agreement that should sustain Magneti Marelli’s Italian business operations and position it strongly for ongoing growth, the two companies revealed.

“The combined business will continue to be among FCA’s most important business partners and we would like to see that relationship grow even further in the future,” commented FCA CEO, Mike Manley.

The new business will be led by Calsonic Kansei’s CEO Beda Bolzenius, who said: “Our industry has gone through fierce change in recent years and the phase to come will be even more dynamic.”

He pledged Calsonic Kansei and Magneti Marelli would work together to create a competitive automotive supplier that was “extremely well placed” among the global top ten, with customers benefitting from increased investment in people, processes and new products.

A spokesperson for Calsonic Kansei told Automotive Logistics: “Upon completion of the transaction, there will be far greater opportunity for investment in research and development, new product development and continued growth across key markets.”

FCA and CK added that the new company would be well positioned to serve customers worldwide thanks to enhanced scale, financial strength and the “highly complementary nature of its combined product lines and geographic footprint.”

The new entity will operate out of nearly 200 facilities in 23 countries across Europe, Japan, the Americas, and Asia-Pacific.

Calsonic Kansei specialises in thermal products, exhaust systems, interiors and electronics, and had a turnover of €7.7 billion last year.