Ferro to leave US Department of Transport in August 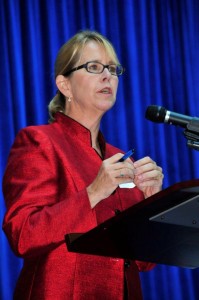 Anne Ferro (left) is leaving her role as head of the US Department of Transport’s Federal Motor Carrier Safety Administration (FMCSA) at the end of August this year to take up a new role as president and CEO of the American Association of Motor Vehicle Administrators (AAMVA).

Ferro has served longer than any other head of the FMCSA, taking up the role in 2009, and has been credited by transportation secretary Anthony Foxx as introducing a new culture of safety in the commercial bus and truck industry.

“[T]he initiatives Anne has championed will continue to increase safety for travellers on our roads for years to come,” said Foxx. “It is a legacy we are proud to continue. In addition, Anne’s infectious enthusiasm for our work and our people has made DoT an even better place to work.”

In an email sent to colleagues last week Ferro said “no job can match the immense honour I have had serving President Obama, and Secretaries Foxx and LaHood with you”.

She went on: “Together, we have made a difference for countless families across the country by raising the bar for safety in motor carrier operations. We have worked to ensure that companies and drivers are more accountable for their actions, strengthened our oversight of high-risk carriers, created better tools for our law enforcement partners, and opened up a new world of useful data to educate both businesses and consumers alike.”

Ferro was previously president and CEO of the Maryland Motor Truck Association from 2003 to 2009 and prior to that was the State of Maryland’s Motor Vehicle Administrator from 1997 to 2003.

“Anne Ferro’s extensive leadership experience, stellar record of advancing motor vehicle safety and enthusiasm for public service make her the ideal choice to lead AAMVA into the future,” said AAMVA chair Jennifer Cohan. “Anne is a former motor vehicle administrator herself and she brings to the position a keen understanding of the top issues on our agenda and what it will require to accomplish them.”

“The opportunity to become AAMVA’s president and CEO is another personal dream come true and I am thrilled to begin working alongside the chief motor vehicle and enforcement officials who deliver safety, service and security to drivers and vehicle owners across North America,” said Ferro.

Amongst some important milestone policy brought in during her tenure at the FMCSA Ferro implemented the Compliance, Safety, Accountability (CSA) programme and oversaw changes in the hours-of-service regulations for drivers;  policy that was controversial for a number of trucking industry bodies, including the American Trucking Association. The changes to the rules currently limit the maximum average working week for truck drivers to 70 hours and stipulate a restart rule of at least two nights of rest between the hours of 1am and 5am.

A vote held by the Senate Appropriations Committee (SAC) on 5 June calls for suspension of the ruling for one year while the DoT conducts a deeper study of the rule’s impact on safety. However, this needs to be passed by the Senate to move forward, which is expected in October this year (read more here).