Domestic Brazilian vehicle sales stood at 527,900 for the first quarter of this year, a decline of 5.4% on the same period in 2020 but down 23% on the previous quarter (Q4 2020), according to the National Association of Motor Vehicle Manufacturers (ANFAVEA).

The difference between the last two quarters is bigger than usual and comes after the recovery in sales that happened in the middle 2020. Figures for Q4 reached more than 684,000. 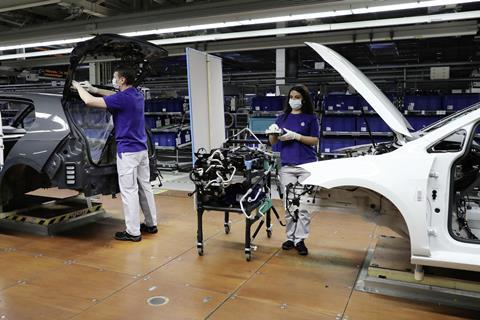 There is also a misleadingly positive 15.7% increase in deliveries when comparing March this year (189,400) with the same month in 2020 (163,500). The increase this year is down to the fact that the coronavirus stopped deliveries in the middle of March last year almost completely.

There is better news from the increase in vehicle exports out of the country. Brazil exported 95,800 thousand units in Q1 this year, a volume 7.6% higher than at the beginning of 2020. Carmakers in Brazil are answering recovering demand for new vehicles in Argentina, Chile and Mexico. Exports to Argentina were up 29% in the first quarter, with a 13% increase to Mexico and smaller 4% increase in exports to Colombia.

“With the devaluation of the exchange rate, companies have prioritised increasing exports to offset the increase in costs with the import of auto parts,” added a spokesperson for ANFAVEA.

Brazil has also maintained shipments to Colombia, to which it can move vehicles with zero tax because of its annual quota with the country.

Brazil produced 597,800 vehicles in the first quarter of 2021, up 2% on the same period last year and largely driven by truck and light commercial vehicle (LCV) production, ANFAVEA reported. That was despite plant closures in the last week of May caused by parts shortages and the impact of the increasing Covid-19 infection and death rates in the country.

However, the impact of the pandemic is still a real concern going into the next quarter, which has obvious humanitarian costs but is also damaging the economy through the political fallout in the country, said Luiz Carlos Moraes, president of ANFAVEA. Across the year there have been 2,300 direct jobs lost in the automotive sector (2.1% of the workforce) but that could increase if the pandemic takes an even greater toll on people and business. Moraes looked forward to greater stability as more people received vaccinations against Covid-19.

Moraes called for greater responsibility and a greater effort from all spheres of power to better vaccinate the population and unlock reform in Brazil’s National Congress.

At the same time, Brazilian vehicle makers, like others around the world, are experiencing bottlenecks in the supply of electronic components, notably semiconductors, over which it has less control than the pandemic and which is expected to last throughout 2021.