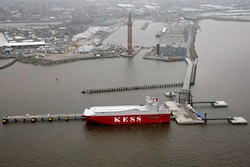 Associated British Ports (ABP) has started ro-ro and vehicle handling operations at the newly completed Grimsby River Terminal in the UK with a delivery this week of Volkswagen Group vehicles. The terminal is one of the largest projects in the port of Grimsby’s history.

The first vessel, “K” Line’s pure-car-and-truck carrier (PCTC) MV Ems Highway, called on Monday July 22nd with a consignment of more than 800 cars that included a mix of Volkswagen, Audi and Skoda models for distribution across the UK. The vehicles were loaded at Emden on K-Line’s European-dedicated service – KESS.

ABP has been working on the £26m ($40m) terminal, Grimsby’s largest project in 160 years, with logistics service provider GBA, the Grimsby-based automotive logistics group that manages the car terminals at the port. It has taken 18 months to construct and several years to plan, according to ABP.

“It has been a long journey to deliver this project,” said John Fitzgerald, ABP’s port director for Grimsby and Immingham. “This new terminal represents major investment for the port of Grimsby and demonstrates ABP’s commitment to the future of the port and its role in the European automotive supply chain.

“We are delighted the first vessel to discharge carried VWs, given the first specialist automotive vessel to arrive in Grimsby in 1975 also carried VWs,” added Fitzgerald.

Volkswagen Group was one of the first carmakers to sign an ‘anchor tenant’ agreement with ABP when the terminal was announced in 2011 (read more here).

The German carmaker’s head of group vehicle planning and logistics, Matthew Bowden recognised the benefit the terminal would bring to Volkswagen’s business.

“This completion of the new river berth is the start of a new era for both ABP and VW Group UK in Grimsby,” said Bowden.

This new facility will allow larger vessels to dock and therefore enable VW Group to bring in more vehicles per ship, he added. “This is particularly useful during the production build up for the two registration peaks each year [in March and September].”

Bowden went on to say that the investment by ABP was a key factor in the carmaker reaffirming its long-term commitment to Grimsby, which remained Volkswagen’s primary import hub.

The dedicated two berth ro-ro terminal is able to accommodate vessels carrying in excess of 3,000 vehicles, significantly increasing the port’s capacity and making it more attractive to carriers. Previously vehicles were berthed at the Alexandra Dock, which was accessed by Grimsby’s original 19th century Royal Lock. The lock cannot accommodate larger PCTC vessels and is limited to ship sizes carrying a maximum of 800 vehicles.

Grimsby is part of the port complex that includes Immingham and Killingholme. It is Europe’s fourth busiest port and moved 788,000 vehicles last year, according to Finished Vehicle Logistics’ annual survey, including those for Volkswagen, Toyota, Peugeot Citroën and Suzuki (read more here).

Grimsby accounts for handling around 500,000 vehicles per year.

An official opening ceremony is planned for 20th September this year.