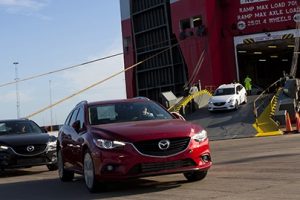 Nordic port and terminal operator Copenhagen Malmö Port (CMP) has revealed growth of over 12% in the number of finished vehicles it handled last year.

The hub port is now the biggest in the Nordic region for cars. It has four vehicle handling terminals that can accommodate 40,000 units. Two are on the Swedish side at Malmö and two across the Øresund strait on the Danish side, in Copenhagen.

Toyota has a 250,000 sq.m dedicated terminal in Copenhagen, which is also home to a second 100,000 sq.m vehicle terminal. Malmö’s two facilities are the Autolink terminal and the Skandia Transport terminal, both of which are linked to the hinterland by rail.

CMP is currently working in conjunction with 20 different vehicle brands at the port, which apart from Toyota include Honda, Peugeot-Citroën, Ford, Chrysler, Mitsubishi, Mercedes, Alfa Romeo and Isuzu.

Last year, CMP started using electric vehicles for the personnel working at its car terminals and said that 50% of the car fleet would be electric-powered by 2020. The vehicles cover 80-100km a day.

Overall the port saw a near-5% increase in volumes last year, handling 15.7m tonnes of goods, up by 700,000 tonnes. The port also saw increases in dry and liquid bulk, as well as a rise in the cruise ship business.