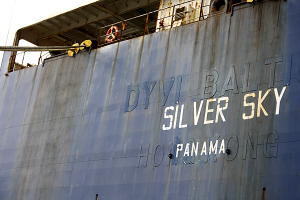 An investigation is underway into a major fire that broke out last week aboard the pure car and truck carrier (PCTC) Silver Sky when it was docked at the port of Antwerp, in Belgium.

The fire is reported to have started around midnight last Thursday (October 20th) in the hold of the vessel, which was loaded with used cars ready for transport to West Africa. According to reports in the maritime press, one of the used vehicles caught fire when being loaded onto the vessel.

Firefighters were kept from entering the ship until late on Thursday because of the build-up of C02 in the hold, according to Belgian shipping, trade and logistics news source, Flows.

Meanwhile, industry news source The Maritime Executive said authorities in Antwerp had detained the Silver Sky for a period of five days in March this year for deficiencies related to fire safety, in addition to concerns regarding the condition of her main engine, electrical systems and navigation equipment.

It has not been a good year for the Silver Sky. In January, it was attacked by pirates off the coast of Nigeria, though the efforts of the crew prevented the pirates from boarding the vessel.