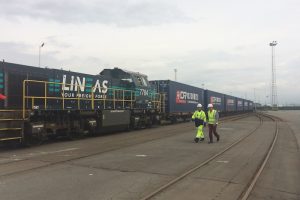 The first dedicated rail shipment of China-made Volvo S90s rolled into the Wielingendok at the Belgian port of Zeebrugge on Friday last week, just 20 days after they had left Daqing in Heilongjiang province.

The train, which carried the cars in 225 containers, marked the official start of the ‘New Silk Road’ rail connection between Heilongjiang and Zeebrugge.

The move follows a deal struck between the port of Zeebrugge and Chinese logistics provider Changjiu Logistics on June 2nd for the launch of the China Europe Railway. That agreement followed one earlier this year between Changjiu and Volvo Cars, which is owned by Chinese carmaker Geely, for shipment of vehicles from the carmaker’s plant in Daqing. Rail logistics are being managed by Changjiu Logistics’ subsidiary CDC International.

Last week’s inaugural shipment was Volvo Cars’ first export of vehicles from China to Europe and one of the most significant examples of using the Europe-China railway link to ship finished vehicles between Asia and European markets.

Volvo will move between 30,000-40,000 new Volvo cars by rail on an annual basis from now on, with between four and six departures a week. That number is considerably higher than the 25,000 first indicated though this is thought to include return hauls as Volvo is looking at moving vehicles from Europe to China according to one source close to the project. The vehicles are being processed by terminal operator ICO.

The vehicles will be moved on from Zeebrugge to destinations across Europe. As well as direct rail and road access, Zeebrugge port is served by 11 short-sea ro-ro operators (as well as seven deep-sea lines).

The rail journey to Zeebrugge runs via Russia, Belarus, Poland and Germany. The total journey time is of around 20 days is significantly shorter than current shipments by ocean. China Rail Express is providing the rail service to the Russian border. DB Cargo's divisions in Poland and Germany are taking over responsibility for the rail shipment between beyond Belarus, while Lineas is handling the final stretch through Belgium to the port. DB Cargo Logistics is also working with Far East Land Bridge (FELB) on the Russia section of the route.

Strong ties with ChinaThe arrival of the first train was marked by a ceremony at the port of Zeebrugge attended by several governmental and corporate representatives from both China and Belgium. They included Xing Qu, China’s ambassador to Belgium, Kris Peeters, Belgium’s deputy prime minister and minister in charge of foreign trade, and the mayors of both Daqing city, Lihua Han, and Bruges, Renaat Landuyt.

“This fast rail connection between our coastal port and China is once again a confirmation of the strong ties between China and Zeebrugge,” said Joachim Coens, president and CEO at the port of Zeebrugge, who was also at the event. He added that its agreement with Changjiu Logistics group linked it to a worldwide production and distribution network.

Volvo is exporting all S90 premium sedans from the Daqing plant to Asia, Europe and the US, as part of its plan to make China a global export hub. Xiaolin Yuan, senior vice-president of Volvo Car Group and president and CEO of Volvo Car Asia Pacific, was keen to point out that this was not at the cost of Volvo’s local production in Belgium, however.

Referring back to when Geely took Volvo over from Ford in 2010, Xiaolin said there were concerns that jobs would be moved from Ghent to China. “Back then, Ghent had 4,000 employees and today it has 5,500 employees, and continues to be the first and biggest factory in Volvo’s system,” he said at the ceremony in Zeebrugge.

[mpu_ad]First regular serviceSpeaking earlier this year at the Automotive Logistics China conference in Shanghai, Chen Gang, vice-president of Changjiu Logistics, who was also in Zeebrugge last week, said the rail service would be the only regular finished vehicle rail service moving Chinese-made vehicles to Europe.

While the current contract is only for Volvo Cars’ exports from China to Europe, Chen pointed to the potential to fill return trains to China with vehicles built in Europe.

Last month, CDC International’s head of key accounts, Vegard Synnes, also pointed to the potential benefits to the automotive industry of the return flows to China on the new China-Europe service.

The agreements the port of Zeebrugge has with Chinese interests in the container sector – including APM Terminals Zeebrugge, in which Shanghai International Port Group and Cosco Shipping ports have partial ownership – also offers scope for container traffic in both directions.

Volvo Cars began production of the S90 series at its plant in Daqing in northern China’s Heilongjiang province last November. The carmaker announced then that it would use Daqing for global exports of the model as part of an overall strategy to turn China into its global manufacturing and export hub. Volvo said it would eventually phase out S90 production at its plant in Torslanda, near Gothenburg in Sweden, and replace it with other models.

“Zeebrugge is probably the largest vehicle operation centre in western Europe and we have established a logistics centre there,” said Chen. “For the past couple of years, Changjiu Group has been trying to enter the international market so we can facilitate the transport of Chinese-made vehicles to the world.”

Last year, Changjiu Logistics went public on the Shanghai stock market as part of a strategy to increase its international presence, according to the company’s founder and chairman, Bo Shiju.

According to sources at the Automotive Logistics China conference, Changjiu won the contract to move vehicles by rail over a number of other international providers including DB Schenker, which already runs numerous services, including for automotive freight, between China and Europe; and Gefco Group, which offers a number of services and is majority-owned by Russian Railways, the state-owned rail provider in Russia. 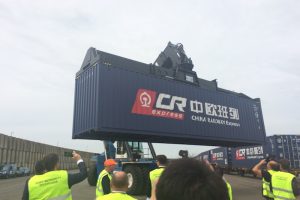 The Daqing-Zeebrugge service is one of four rail services Changjiu Logistics has planned between China and Europe, which include one to Milan, in Italy.

“We will start the China to Milan rail service pretty soon,” Chen told delegates. “Fiat is close to Milan and they need to import a lot of spare parts.”

According to Chen, Changjiu Logistics is also looking at a service to Poland and another to Wilhelmshaven, on the German North Sea coast. The locations are strategic, said Chen, as the company is striving to cover the north, east, south and west of Europe. Port locations such as Zeebrugge and Wilhelmshaven also open up the prospect of links to further international markets.

Chen added that Changjiu already had contracts with a number of carmakers moving material between Europe and China, including Audi, Volkswagen and Jaguar Land Rover. He said Changjiu had also won a contract with JLR to move vehicles from Europe to China. JLR has not yet confirmed this.

Europe-China rail flows increaseThe Europe-China railway has enjoyed increasing usage in recent years, including as part of China’s ‘One Belt, One Road’ initiative, which seeks to improve trade links between China, Asia, Europe and the Middle East.

According to Zhang Xiaodong, professor of traffic and transportation at Beijing Jiao Tong University, there were 1,700 trains between China and Europe in 2016, of which more than 570 came from Europe. By 2020, the Chinese government and railways anticipate the total will rise to 5,000 trains.

While there have been numerous reports of trials and spot shipments of finished vehicles by rail from Europe to China – notably from Germany to Chongqing, in western China – there are currently no regular services. Services from China to Europe have been even rarer although various Japanese carmakers, including Mazda, have used rail to move vehicles to Russia and even to Europe at various times over the past decade.