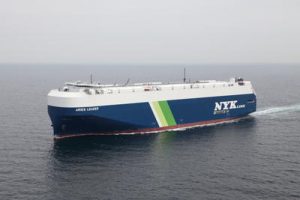 According to NYK the vessel includes the latest energy-saving technology, including an air-lubrication system, which reduces the frictional resistance between a vessel’s bottom and the seawater by supplying air to form bubbles. It also features a hybrid turbocharger. It is the first time these technologies have been used on a car carrier.

NYK has already achieved an 18.1% reduction in CO2 emissions in fiscal 2013, significantly exceeding the 10% reduction goal set in in its New Horizon 2010 management plant, which called for a 10% reduction by 2013.

The Aries Leader is the first of four vessels that NYK ordered in 2012. Shin Kurushima Dockyard will build one more and the other two are being built by Imabari Shipbuilding at its factory in Marugame city in Kagawa prefecture.