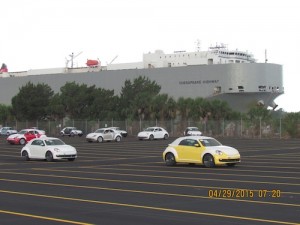 Following the news that Volkswagen Group of America (VWoA) has added the Jacksonville (Jaxport) to its entry ports for distribution of vehicles in the US Southeast, today (29 April) saw the first vessel arrive at the port loaded with VW Group passenger cars.

A spokesperson for VWoA confirmed that almost 1,000 vehicles were delivered aboard the car carrier vessel Chesapeake Highway, operated by ocean forwarder K Line. The first volume was made up of VW Beetle, Golf and Jetta models produced at the carmaker’s plant in Puebla, Mexico. A second vessel, the Goodwood, which is operated by Siem Car Carriers, is scheduled to arrive on Thursday (30 April) carrying almost 750 vehicles, including VW brands, as well as Audi and Bentley models.

The carmaker said it will move 100,000 VW, Audi and Bentley units through the port in the first year, with plans for 550,000 in the next five years.

“Preparation of the Jacksonville facility has been ongoing for several months and first vehicles have already been processed by Amports and released to the truck carriers for dealer delivery,” the spokesperson told Automotive Logistics.

The vehicles are shipped into Jaxport from plants in Europe and Mexico for onward distribution within Florida, Georgia, South Carolina, North Carolina, Alabama, and Mississippi.

VWoA has 118 dealers in the southeast region and the company is working with four road haulers for the distribution of the vehicles from Jaxport to those dealers: Crown Auto Transport, Hanson and Adkins Auto Transport, Pasha Distribution Services and United Road Services.