Focus on Spain part 2: A platform for reorganisation 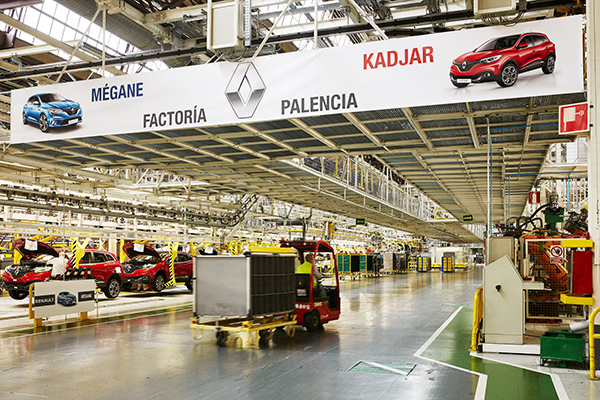 Renault has integrated the Alliance's CMF architecture in Palencia, and is ramping up kitting to handle an increased number of parts.

The introduction of an all-new vehicle architecture into a plant can be a fraught experience at the best of times, but when it is accompanied by the need to continue producing cars on an existing platform while increasing staff numbers, retraining existing employees, adding an extra shift, and doubling both part numbers and assembly output, the logistics and supply chain headaches intensify markedly.

Yet that is exactly what has been going on at Renault’s Palencia plant in northern Spain. The expansion of Palencia has enforced revisions to storage, the supply chain, parts movement and working practices. The carmaker has also invested heavily in increased automation at the Spanish plant, including the introduction of more than 350 new robots.

Other stories in this feature

Along with other carmakers, Renault has been investing significantly in its Spanish manufacturing footprint, which includes two assembly and two component plants across four locations (its alliance partner, Nissan, has plants in Barcelona and Avila, see map). Palencia has benefitted from a good chunk of the €600m ($639m) Renault is investing in Spain between 2014-2016 as part of a competitive performance pact it made with the Spanish unions and government in 2012, which included investment guarantees and increased production in exchange for limits on wages and benefits.

With the launch of the Kadjar crossover SUV at Palencia in early 2015, and the start of production of the fourth generation Mégane C-segment there in November, production is rising dramatically. While the plant built 133,700 vehicles last year – one of the lower totals in its recent history – assembly is now expected to more than double as a third shift is reintroduced after having been cancelled in 2011. By 2016, 300,000 units are expected to be built.

Productive growth
Palencia has long been the home of the Mégane range. The plant now builds three body styles of the third-generation, including a hatchback, alongside the fourth generation, which uses the Renault Nissan Alliance CMF (Common Module Family) C/D architecture. The new Mégane shares this architecture at the plant with the Kadjar, which has quickly become one of Renault’s fastest selling vehicles.

The CMF platform has been engineered to improve manufacturing efficiency and quality, reduce costs, and allow more features – such as four-wheel drive for the Kadjar and four-wheel steering for the Mégane – to be integrated into the production system. By using the same architecture, the vehicles share subsystems, including the engine compartment, cockpit, front and rear underbody units and electrical systems. Eventually CMF will underpin six models to come out of Palencia as the current Mégane range is replaced.

“CMF gives us total flexibility in our production systems and processes, and allows for continuous improvement and integration with the ‘Alliance Production Way’,” says Palencia plant director José Antonio Lopez, referring to the Renault Nissan manufacturing system that the plant implemented earlier in 2015. “We can now manufacture a platform designed by Nissan, and it will become more and more easy once we are fully integrated.”

For now, though, Palencia must cope with something old and something new at the same time. Mégane III bodies are made on a traditional assembly line with 16 auxiliary lines feeding in sub-assemblies, such as doors. The CMF cars, meanwhile, are built using robot cells in what used to be a logistics store, with parts delivered by AGVs (automated guided vehicles) and a high degree of kitting.

There is no manual handling in this section of the plant. The contrast can best be seen in employee numbers: 856 people work in body assembly at Palencia, but only 14 are in the new CMF building, where 320 Kuka robots have been introduced. The old body shop has seen the refurbishment of 70 robots, mainly for door and bonnet assembly.

“We have 95% of welding, body assembly and painting by robot, and are phasing in collaborative robots for engine assembly, which is a real revolution,” says Lopez. He adds that in 2014 Palencia produced fewer than 600 cars a day. Now the number has reached 1,350. “We are improving productivity step by step with good quality,” he says. Employee numbers have risen from 1,900 to 4,200 over the past 18 months. 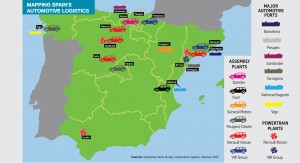 A shared, global supply chain, served locally
Renault’s supply chain is closely integrated across its Spanish plants. Valladolid, about 45km south of Palencia, assembles the Captur and Twizy, but is also a major stamping centre and engine plant. It supplies Palencia with most stampings, though Palencia also produces external parts. Renault’s transmission plant in Seville, in the south of the country, also contributes to a highly localised level of supply.

“If a part is large it needs to be made close to [Palencia],” says Lopez. “We get engines from Valladolid, and fuel tanks and bumpers – 80% of our parts volume comes from within Spain, but there are some that come from Korea and China.”

With the shared architecture, Renault’s Spanish supply chain is linked to Alliance locations in Europe and globally. CMF C/D models include the Qashqai, built at Nissan’s UK plant in Sunderland, and the new Renault Éspace and Talisman, built in Douai, France. In the US, the hot-selling Nissan Rogue (known as the X-Trail elsewhere) also uses this architecture, where it is built in Smyrna, Tennessee, as well as by Renault-Samsung in Busan, South Korea and, from 2016, in Kyushu, Japan. These vehicles share a large proportion of part numbers, including some that are single-sourced and shipped across regions to make the best use of economies of scale.

For example, many parts for Palencia come out of Sunderland, says Renault group manufacturing and logistics director José Vicente de los Mozos. However, he points out that Renault is balancing these shared parts with as much local supply as possible. Currently, the carmaker sources more than 60% of parts for Palencia within 100km. “That means lower logistics costs,” says de los Mozos. “Around 80% of supply for Kadjar comes from within Spain, while for the new Mégane it will be 70-80%.

With the increase in part numbers and variation for these new vehicles, Renault has had to reorganise a considerable amount of the parts flow and manufacturing setup in Palencia. For example, the storage space that was eliminated to make way for CMF body assembly has been replaced with two external warehouses, both fewer than 4km away. There is also a 30,000 sq.m supplier park employing 300 people close to the plant’s front gate. The park has five main suppliers that deliver stampings, plastics and some sub-assemblies.

“We have changed the formation of the plant and the logistics flow, but it is still not finished,” says Lopez. “We have much more lean production, but we have still not finished the chassis and trim line, and we do not yet have enough AGVs.”

Perhaps the most essential change for the logistics flow has been the increase in kitting. Every CMF car is delivered to the single final assembly line with a full kit of parts, which is set to increase as the Mégane III is phased out. The total parts count for the vehicles at the plant is now 4,500 – double what it was before CMF. The kitting helps workers to manage this diversity by matching the assembly sequence as near as possible. The Alliance has increased such kitting processes at other plants as well, including at Sunderland, France and in North America. At Palencia, planned kitting levels are around 75% complete. 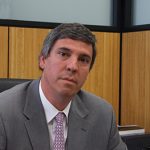 "More AGVs is the next step, and we are thinking of kitting the automated stations and looking at collaborative robots, but first we need to stabilise and decide on the right level of automation"

“We started bringing in kitting before the arrival of Kadjar and Mégane IV as part of our leaner manufacturing,” says de los Mozos. “More AGVs is the next step, and we are thinking of kitting the automated stations and looking at collaborative robots, but first we need to stabilise and decide on the right level of automation.”
Renault has also adapted other supply chain processes for the plant, including synchronising supplier production more closely in line with assembly.

De los Mozos praises the progress that Renault has made thus far at Palencia and in its supply chain in Spain. He points to a young workforce, and a good working relationship with Spanish unions. “They understand what is needed for competitiveness,” he says, adding that Renault also carries out training programmes on three levels with its suppliers.

Renault’s Spanish operations are also adapting processes in production and logistics from other Alliance plants, which is helping to make Palencia more competitive. “In one year we will see manufacturing of the secondary flow automated,” says de los Mozos. “We are not at the level of Sunderland yet, but at Renault we know where we want to go.”