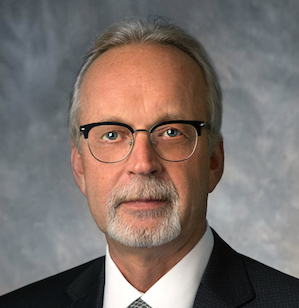 Foote will take on the responsibilities of Cindy Sanborn, the current COO, and Fredrik Eliasson, chief sales and marketing officer, both of whom plan to resign with effect from November 15th. The company says the two will “remain engaged in supporting the transition until early 2018”.

Because of the appointment, the company has decided to postpone its October 31st investor conference to a later, as yet unspecified, date.

“CSX is pleased to welcome an experienced railroader who will help continue to drive the company’s transformation,” said E. Hunter Harrison, president and CEO. "Jim’s proven track record with Precision Scheduled Railroading will be a significant asset as we continue to drive value for shareholders and customers.”

The two executives worked together at rail company Canadian National when Harrison held the CEO position and Foote was chief sales and marketing officer.

Foote has over 40 years of railroad industry experience, starting with the Chicago and North Western Railroads and then with Canadian National.

Most recently he was president and CEO of Bright Rail Energy.

Veteran railroad executive and turnaround specialist Harrison was appointed in March this year to replace Michael Ward. His appointment was one of a number brought about by activist investor Mantle Ridge.

The US Surface Transportation Board hosted a hearing in Washington, DC in October after a number of complaints about CSX’s service over the summer as it implements the Precision Scheduled Railroading system.

In a recent conference call, following the release of the quarter to end-September results, Harrison said: “We we went through some slippage, service-wise, in the third quarter, which we are not proud of.

“We had a listening session with the Surface Transportation Board last week. There were some mixed reportings there but I can tell you this: I’ve been in this business a long time and this company is back to where it was, it is better and it is climbing. I see those issues, generally speaking, behind us.”

On the same call, CFO Frank Lonegro said velocity and dwell performance in September were favourable compared to first quarter levels and were expected to continue to improve.

In other news, Ellen Fitzsimmons, executive vice-president, law and public affairs, general counsel and corporate secretary, has also announced her retirement from CSX, effective November 15th. Nathan Goldman, the company’s current vice-president risk compliance and general counsel, will be promoted to the position.