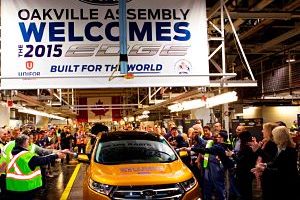 The deal comes after similar recent agreements between Canada’s largest union and carmakers General Motors and Fiat Chrysler Automobiles (FCA), completing the round of wage negotiations between the union and the ‘Detroit Three’ carmakers.

Ford’s manufacturing presence in the country includes a vehicle assembly plant at Oakville and two engine manufacturing plants at Windsor, along with two parts distribution centres.

While Ford would not comment on the specifics of the agreement until the union’s members had voted on it, Unifor said the deal was of a similar structure to those signed with the other carmakers. These involved wage increases totalling 4% during the period and signing bonuses totalling $12,000 apiece, said the union.

It also said it had secured a commitment of “significant investment for Canadian-made Ford products”.

Unifor Ford Bargaining Committee chair Chris Taylor said: “This was a challenging round of talks for all of us, but we kept our eyes on the prize and secured an offer that maintains and strengthens a future for our members. The pattern and the achievements in this contract are exactly the kind of security our members needed.”

Unifor members will vote on the tentative agreement this weekend (November 5th-6th).