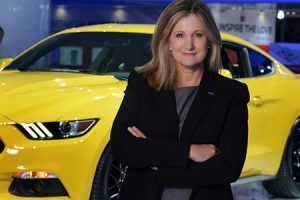 Ford is making some top-level executive changes at its divisions in Europe and South America as a result of the imminent retirement of Barb Samardzich (pictured), vice-president and chief operating officer at Ford of Europe.

Samardzich is retiring at the beginning of October after more than 26 years with the company. She will be replaced by Steven Armstrong, who will move from his role as president of Ford South America.

Samardzich has served in a number of top positions at Ford in the US and Europe and has been in her present role since November 2013. She has overseen many of Ford of Europe’s operations, including manufacturing, quality, product development, purchasing, and sustainability, environment and safety engineering.

“Barb’s leadership and expertise have been critical to the transformation of our Ford of Europe business into a vibrant and profitable organization,” said Mark Fields, Ford president and CEO. “Over the course of her career, she was instrumental in developing our global powertrain line-up, along with guiding the design and engineering of many Ford vehicles including Mustang and F-Series Super Duty. We are grateful for her many contributions and strong leadership over the years.”

Lyle Watters is succeeding Armstrong as president of Ford South America and will also be named vice-president, Ford Motor Company as of August 1st. He moves from his role as chief financial officer and vice-president, finance and strategic planning, Ford of Europe.

Watters will be responsible for leading all Ford operations in South America and will report to Joe Hinrichs, Ford executive vice-president and president, The Americas.