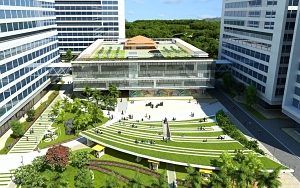 Ford has announced plans to bolster its engineering, IT and supply chain skills in India with a new product development and business centre in Chennai. The $195m investment is expected to increase India’s role as an export centre, as well as a stronghold for data and analytics – including in logistics.

“The new centre in Chennai will help develop the future products and innovations for Indian consumers as well as contribute to global products, mobility solutions, autonomous vehicles, big data and analytics projects, and ways to enhance the global customer experience,” a Ford spokesperson told Automotive Logistics.

Bill Ford, the company’s executive chairman, visited Chennai, in Tamil Nadu in the south of India, on November 8th to announce the global technology and business centre. It will be Ford’s third development centre in the Asia Pacific region, alongside facilities in Nanjing, China, and Melbourne, Australia.

Over the next five years, Ford plans to hire 3,000 new workers to fill the centre in Chennai, while consolidating 9,000 employees from six existing facilities in Chennai there. With 12,000 staff, Chennai will be Ford’s second-largest centre of employment globally after Dearborn, in Michigan. It will also be the OEM’s second largest IT and app development centre globally, according to the company.

This investment will support Ford’s production and supply chain in India on both on the product and engineering side, as well as business services including mobility solutions and data analytics.

India is already an important manufacturing and export hub for Ford, which builds a number of global products at its assembly and powertrain plants in Chennai and, since March 2015, in Sanand, in the state of Gujarat. In total, Ford’s Indian plants have an annual installed manufacturing capacity of 610,000 engines and 440,000 vehicles.

The company has also initiated an accelerated export strategy from India, exporting to more than 40 markets around the world. Ford is now one of the country’s largest passenger vehicle exporters, shipping nearly 111,000 vehicles in the 2015-2016 financial year; in the first seven months of the current financial year, Ford exports have grown 35% year-on-year to nearly 90,000 units.

The carmaker’s presence in the domestic Indian market, however, remains relatively small, with Indian sales around half the level of exports.

Ford’s exports from India have grown strongly to western markets, including exports of the Figo to Mexico and to Europe (where it is sold as the Ford Ka) from Sanand. Ford has also exported its Ecosport compact SUV to Europe from Chennai since 2014.

As the Los Angeles Auto Show began this week, Ford announced that from 2018, it would begin exporting the Chennai-built EcoSport to the US.

The development centre is expected to further integrate India’s manufacturing and design to other Asian and global markets. “Working as part of Ford’s global product development network, the centre in Chennai will collaborate closely with Ford teams around the world to develop the future products and technologies for global markets,” said the spokesperson.

India as a global data centreThe Chennai hub will also specialise in business services and data, an area expected to support Ford’s supply chain and logistics operations. At the recent Automotive Logistics India conference in Gurgaon, Amlan Bose, Ford Asia Pacific vice-president of inbound logistics, exports and customs operations, pointed to the carmaker’s increasing use of data analytics to monitor and plan its supply chain and logistics across its various departments and with its fourth party logistics provider, Penske.

Bose said Ford’s investment in the Chennai centre was evidence of how important such analytics and technology would be across the company’s wider supply chain in India and Asia Pacific. He suggested the investment was supported by the carmaker’s faith in strong growth in the India’s domestic and export markets, and said it would play a key role in shaping its products and manufacturing, as well as innovation in logistics.

The Ford spokesperson also suggested that the Chennai facility’s range of testing centres and laboratories would further help Ford to develop and source material, as well as maintain staff in India.

“We believe the centre will help us attract world-class engineers, scientists and skilled workers,” he said.

For more coverage on India, see the full report from Automotive Logistics India.