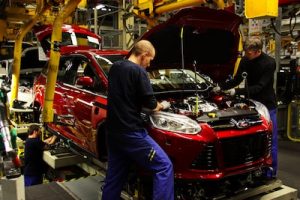 Ford has confirmed it is to move production of the Ford Focus from the US to Mexico. Speaking at an investors’ day earlier this month, chief executive Mark Fields said the move away from the current Michigan plant would be completed over the next two to three years.

The move was criticised by presidential candidate Donald Trump who suggested it would lead to job losses in the US. That was subsequently rejected by Fields, however, who stressed other operations would be replacing Focus production at the site and that no jobs would actually be lost there.

“It’s really unfortunate when politics get in the way of the facts,” Fields told CNN about Trump’s comments. “We’re very committed here [in the US].”

Ford has not disclosed which site in Mexico will produce the Focus but its new $1.6 billion facility in San Luis Potosi, construction of which is due for completion in 2018, looks like the obvious beneficiary. Earlier this year, Ford Mexico president and chief executive officer Gabriel López confirmed the carmaker’s intention to make Mexico a global hub for its smaller vehicles and low-fuel-consumption models. Union and media sources have long been suggesting that production of both the Focus and C-Max sedans would be moved to the country.

No mention of the C-Max was made in the latest announcement but a spokeswoman for the OEM told Automotive Logistics the decision to move the Focus to Mexico had been taken by Ford “so it can achieve financial success with that vehicle”. She declined to say what cost savings the carmaker anticipated from the move, however.

Ford will be moving two new vehicles to the Michigan plant in due course, she confirmed. “Ford will continue to make cars, SUVs and truck in the US, as its American workers have for more than 100 years,” she added.