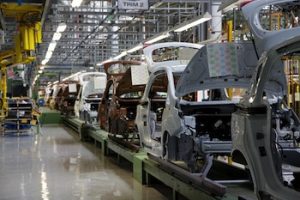 Following speculation last month that Ford could bring production of its EcoSport SUV to the Craiova plant in Romania, the carmaker has now confirmed that it is investing up to €200m ($223m) to do just that, along with its component tooling suppliers.

It plans to begin assembly at the plant (pictured) – where it already produces the EcoSport’s 1.0-litre engine – in autumn next year. The Craiova plant also builds the B-Max MPV and is looking to add further products to fully utilise its capacity.

The EcoSport sold in Europe is currently built at Ford’s plant in Chennai, India. That plant will continue to build for the domestic market and other export markets – in keeping with comments Ford made late last year to the effect that it sees India as a strategic export hub within its wider Asia Pacific strategy – but a steep increase in sales in Europe, along with projected growth, has convinced the carmaker to localise production in the region.

According to Ford, the move to Craiova will require a new supply network in Europe, with suppliers investing in tooling to make the parts required for production.

“EcoSport sales are up nearly 30% this year and given the continued outlook for sales growth in the small SUV segment, it’s the right time to move EcoSport production to Europe and take advantage of the excellent workforce and operations we have in Craiova,” said Jim Farley, president and CEO, Ford of Europe.

Last year the carmaker sold almost 39,800 EcoSports in Europe, up from 26,900 in 2014. Furthermore, Ford expects the small SUV segment to grow to about 1.5m vehicles a year by 2017 – an increase of 35% on 2015. SUVs are already the fastest-growing segment in the European new vehicle market, according to Ford, up 23% last year compared with overall industry sales growth of 10%. The small SUV market in which EcoSport competes has shown an even greater increase, rising 44% in 2015 over 2014.

The move to shift EcoSport production to the Craiova plant follows Ford’s discussions with the Romanian government on developing the plant as a production base in the country and maintaining the global competitiveness of manufacturing there.

“Craiova has a bright future if it continues to improve its competitiveness and operational flexibility,” said Farley. "The recent successful agreement on a two-year labour contract was a very positive step. We also need to continue to work with the government and local authorities to improve infrastructure and logistics.”