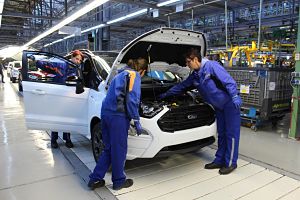 The first EcoSport compact SUV to be produced at Ford’s Craiova plant in Romania rolled off the line this week, following a €200m ($235m) investment.

The company said the decision to build the model on the continent rather than continue to import it from its plant in Chennai, India, would help it “respond to rising customer demand”. The vehicle has been imported from India into Europe since it was launched in the region in 2014.

The localised EcoSport, which has also been given design and feature updates, will reduce lead times, logistics and inventory costs – though Ford will still have to navigate a long, multimodal supply chain from Romania to the rest of the continent.

Steven Armstrong, Ford’s president for Europe, Middle East and Africa, said: “With demand growing for EcoSport, and compact SUVs in general, now is the right time to localise production in Europe to meet our customers’ needs.”

In Europe, SUVs are the fastest growing vehicle segment and now account for more than a quarter of all passenger car sales, compared with under 10% a decade ago.

Ford first confirmed it would be manufacturing the vehicle in Romania in March last year. The plant will also build the model for some markets outside of Europe, including New Caledonia, Turkmenistan and South Africa.

Production in Romania will involve significant parts imports from Asia and Brazil, as Dirk Willmann, head of Europe for Ford’s MP&L department, confirmed in a separate interview with Automotive Logistics recently.

During the interview, Willmann disclosed some of the more detailed aspects of the logistics route from Romania to the European market. For the current B-Max model at the plant, for example, about 85% of cars move by rail to central and western Europe, for instance to Cologne and to Flushing for onward distribution. A small share also moves by rail to the port of Constanta for ocean export.

According to Willmann, Romania has very dense rail infrastructure, with a high ratio of tracks connected to the wider European network. However, as EcoSport volume from Craiova is likely to increase relative to the outgoing B-Max, Willmann admitted that Ford had some concerns about the speed and reliability of rail services in Romania.

“Romania has a very good network, but it needs maintenance,” he said. “The speed of rail drops off sharply once trains enter the country, for example. We are speaking with the Romania government about improving rail, as well as road infrastructure and bypasses.”

Locating the vehicle in Romania will bring other challenges, including managing a complex inbound supply chain with many global components, and long rail routes to central and western Europe. However, it will ultimately reduce lead times to European customers.

“Bringing production of EcoSport to Europe was absolutely the right thing to do, as it helps to reduce the disadvantages inherent in long lead times, quality management and inventory costs,” said Willmann.

The EcoSport has hitherto been built in Brazil, Thailand and India, though the model is also assembled in small volume from imported components in Russia. As such, EcoSport’s supply base is almost entirely based in Asia Pacific and South America.

In bringing EcoSport to Romania, Ford’s European logistics team worked with production and purchasing to determine which parts to localise, analysing nearly every component to see which were the most expensive and inefficient to ship.

“We came a long way, but we still have a lot of parts coming from Brazil, India, Thailand and China,” said Willmann.

The imported volume is too substantial for suppliers to ship individually. Instead, in a first for Ford’s European supply, it will use regional logistics networks in Asia and South America. Ford’s logistics providers in India, Thailand, China and Brazil pick up parts from suppliers and consolidate them in the country of origin, where they are packed into sea containers.

They are then shipped by ocean to Romania via the port of Constanta in the Black Sea, where they move to Craiova by rail and road to an import deconsolidation centre.

As the Los Angeles Auto Show earlier this year, Ford announced that from 2018, it would begin exporting the Chennai-built EcoSport to the US.