Ford ends production in Australia after more than 90 years 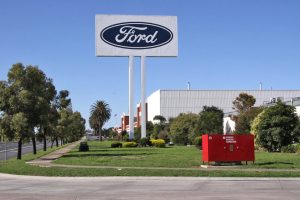 [Updated October 13th] Ford has closed its assembly plant in Broadmeadows in the Australian state of Victoria, as first announced back in 2013.

The plant opened in 1959 but Ford had been making cars in Australia for 91 years when the Model T went into production in 1925. The last Falcon model came off the line last Friday (October 7th). That marks the end of Falcon production altogether.

The carmaker also closed its engine manufacturing plant in Geelong (pictured) on the same day.

Ford has previously said high manufacturing costs and market fragmentation had forced it to pull production out of the country.

The Broadmeadows plant made the Falcon and Falcon Ute along with the Territory and certain performance vehicles. A spokesperons for Ford Asia Pacific said that the Territory was a very popular SUV but, like the discontinued Falcon, had no direct replacement. "We are getting the Edge in 2018 but that is part of a larger SUV portfolio change – not quite a direct Territory replacement," he said.

Ford has so far not revealed where it plans to import vehicles to the country from but Asia Pacific is a dynamic and important region in terms of logistics.

Adding to that activity, the carmaker now has plans to shake up its model offering in Australia and is already importing a right-hand drive Mustang.

In an interview with Automotive Logistics at the end of last year, Bob Laurila, director of material planning and logistics for Ford in Asia Pacific, said the carmaker was planning to bring in a lot of products from Europe and Thailand. He said managing import processes would be very important as Australia remained “a very good market”. He added that it would be critical to maintain strict control and visibility across the vehicle import process.

Last week, the carmaker was forced to switch to air freight to move parts inbound to the Broadmeadows plant to meet its scheduled final shutdown because of a hold-up caused by the collapse of Hanjin Shipping.

Ford is one of a number of carmakers pulling production from Australia. GM’s Holden division will also stop making cars there by the end of next year, as will Toyota.

In 2007 production in Australia was around 335,000 units. When Mitsubishi closed its factory in Adelaide in 2008, the remaining three plants produced around 220,000 units in total each year, a figure that has drifted even lower since the closures were announced. Last year, vehicle production in Australia fell to 167,500 units compared to around 175,000 in 2014, according to the country’s Federal Chamber of Automotive Industries.

Read more about the changes in the Australian market