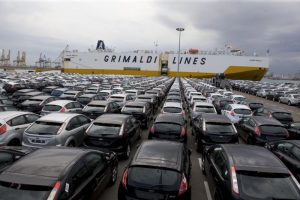 Ford has completed a $2.6 billion investment since 2011 to increase production at its Valencia assembly plant at Almussafes in Spain by 40%.

It is the biggest investment in the history of the country’s car industry. This year output is expected to reach 400,000 units across six different vehicles made exclusively at the plant and the majority will be for export around the world, meaning greater traffic for the adjacent vehicle handling ports, which are just 20km from the plant.

The Valencia plant currently builds the Mondeo wagon, five-door and four-door models, including the Mondeo Hybrid, as well as the Kuga SUV, Transit Connect light commercial vehicle and the Torneo Connect MPV. Later this year it will add the S-Max MPV and Galaxy people mover, along with the Vignale Mondeo.

Of that output 80% will be exported to as many as 75 countries and, thanks to an agreement signed in December last year, Ford will be able to manage the increase in exports between the ports of Valencia and nearby Sagunto, which both fall under the management of Valenciaport.

"Ford has chosen the Port of Sagunto to export 100,000 units this year to the USA and other European markets," confirmed a spokesperson for Valenciaport. "This vehicle traffic in particular is not additional traffic for Valenciaport, but we expect increases in Ford traffic from the second half of 2015 because the factory has gone from producing two models to five."

Valenciaport expects to handle more than 290,000 Ford vehicles, based on export volumes at  both ports. This represents a 32% increase from 2014, according to the spokesperson, and will have a positive impact on business this year and in 2016.

“This world-class facility will help Ford accelerate its growth in Europe and around the world,” said Mark Fields. Ford’s president and CEO. “Valencia is not only a major hub of production – building vehicles and engines exported to 75 countries worldwide – but also a centre of innovation, employing some of the industry’s most advanced lean, flexible and environmentally friendly manufacturing processes.”

It will also be a major export hub, especially if its goals of reaching a potential 450,000 annual unit output are to be realised.

The principal markets for those are in Western Europe, which after the domestic market in Spain, include the UK, Germany, Italy and France. The company has also signalled North America as one of the regions that will benefit from the increased output.

Ford previously used the adjacent port of Valencia for the majority of its exports from the Almusafes plant. The port is currently ranked number 12 in terms of European vehicle volumes with the number of units exported up almost 30% in 2013 to 271,000. Valencia handled 453,000 vehicles in total in 2013 (2014 figures will be published soon in Finished Vehicle Logistics).

However, in December last year, Ford announced it would be using the nearby port of Sagunto, which has relatively low vehicle export numbers, to move up to 100,000 units annually. Sagunto now has around 50 hectares of space dedicated to automobile logistics.

As reported by Automotive Logistics, an agreement was signed with operator Noatum Ports, which operates the Terminal Polivalente Sagunto (TPS), and as part of that deal the terminal will now concentrate mainly on exporting finished vehicles for Ford from Spain to North America. Baltimore, Halifax, Jacksonville and Newark ports are the main destinations that will be served, by Grimaldi Lines, NYK, Höegh Autoliners and Neptune Lines. There will also be additional consignments to other destinations in Europe.