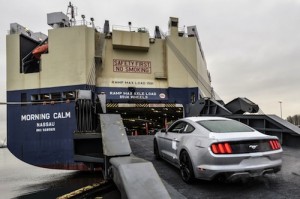 Ford’s iconic Mustang brand is being exported in volume shipments from the US to global markets for the first time in its 50-year history. The first shipment of just over 100 vehicles made at the Flat Rock manufacturing plant in Michigan has left the port of Portland in Oregon, on the US West Coast, on its way to China.

Ford said that exports to Europe would follow in the middle of 2015 and that the Mustang is targeted at more than 100 markets around the globe. This will include the addition of a right-hand drive version for countries including Australia, South Africa and the UK.

Ford confirmed that Portland is one of eight ports from which the vehicles will be shipped: Baltimore, Jacksonville, Palm Beach, Port Everglades, and Newark, on the East Coast; and Hueneme, Portland and San Diego on the West Coast. The carmaker added that 100 more jobs have been created at the port of Portland to support Ford exports bound for Asia Pacific and other markets.

The vehicles are being shipped by rail from Flat Rock to Chicago by Canadian National where they are then picked up by rival rail provider BNSF for onward transport to the port of Portland.

The Mustang follows the export of Lincolns from the port of Portland to China, which began in September last year and included the Lincoln MKC, which is made in Kentucky. The carmaker first started using Portland for exports to China in 2013 with exports of the Edge crossover and Explorer SUV. Previously, all exports to China went through the port of Newark in New Jersey.

In a forecast of the potential for these latest exports, Ford said that it started exports of the Explorer to China in 2012, beginning with just 200, but by last year that number had grown to 9,000. In 2013 it exported a total of 380,000 vehicles from the US abroad. In the same year, Ford’s Flat Rock assembly plant made its one millionth Mustang.

As with its other exports to China, the Mustang has to undergo a number of steps to ensure compliance with vehicles standards in the country. Customs and tracking documentation are also administered at the port of export. In preparation for the growth in exports through the port of Portland Ford’s port processor Auto Warehousing Company (AWC) received full approval by the Chinese government for handling at its facility on Terminal 6.

A $2.8m project to expand the processing building by 2,500 sq.m and increase capacity to more than 110,000 vehicles annually was completed in 2014. The expansion was financed by ConnectOregon IV state grant funding, and a $560,000 investment by AWC.