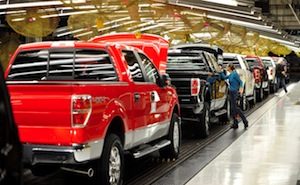 Ford said it had reached agreement with workers this week at its Kansas City assembly facility in Claycomo, Missouri over a local labour dispute, but it is not clear whether the carmaker is still going ahead with the reorganisation of parts supply to its Dearborn plant.

"Working with our UAW partners, we have resolved the open items at [the] Kansas City Assembly Plant and have agreed to a tentative local agreement. Plant operations will continue as scheduled,” Ford said in a statement.

According to a report in the Dearborn Free Press, Ford had begun sending steel frames for F-150 production – which are in short supply – to Dearborn, where it was also planning extra shifts to increase F-150 output in a contingency plan to deal with the anticipated strike at Kansas City Assembly.

A spokesperson for Ford told Automotive Logistics that the company would not provide any further details.

The local branch of the United Auto Workers union (UAW 249) reported on its website last week that strike action was being considered because Ford had refused to address important issues around safety, seniority, manpower and other issues at the Kansas City Assembly Plant, despite having met more than 40 times since April this year.

“We feel we have no other choice at this point to reach a fair agreement,” said Todd Hillyard, bargaining chairman at UAW 249.

Ford’s statement that an agreement has now been reached has yet to be corroborated by the UAW division.

Ford has been suffering from a shortage in the supply of high-strength steel frames for the F-150 for a number of months now as it ramps up production after a year of disruption caused by the switch in retooling for a new generation of full-size pickups with aluminium content.

The steel frames had been exclusively supplied by structural components supplier Metalsa, but Ford has now brought in Tower International to help meet the shortfall, according to information from IHS Supplier Business. Tower International also specialises in structural components and assemblies for the automotive industry, and in June this year it received a gold award from Ford in the company’s annual World Excellence Awards event for its efforts.