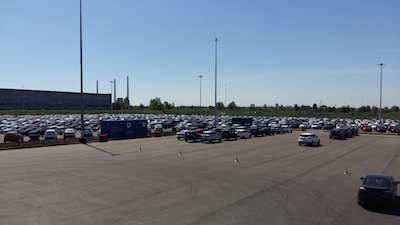 [Updated July 28th] Uncertainty in the Russian automotive market has left many firms unwilling to enter into long-term agreements, but Ford and Vectura – the Russian branch of Polish finished vehicle logistics provider Adampol – have revealed a new five-year contract signed back in September that will see Vectura handling all of the finished vehicle logistics needs for Ford’s joint venture in Russia, Ford Sollers.

Edward Karibov, director of Ford’s outbound logistics and planning department, said the move to use Vectura as the carmaker’s exclusive provider for all operations in Russia would provide better transparency on service costs and delivery capacity in the long term. Having that transparency was important because the looming deficit in Russia’s overall car carrier fleet would push up prices for logistics services, he said.

“Our main desire with this contract is to have a good forecast on the cost of logistics services,” confirmed Karibov. “This is because, when the market starts to recover, we will definitely face a situation in which the services available on the market will not be able to meet demand for vehicle delivery. Basically, such a situation will lead to a rise in prices.”

Under the contract – which may be extended by a further two years – Vectura must invest in 100 new car carriers over the next two to three years to support its outbound operation with the trucks being sourced from Ford. That will mark Vectura out as one of the few companies currently investing in fleet renewal, according to Kirill Glukhov, Vectura’s business development manager. The new fleet will help remove operational risk for Ford Sollers and allow Vectura to serve more customers, he added.

Karibov stressed that the issue of cost containment was very important for the carmaker. “We are trying to conduct optimisation in every area possible,” he stated.

Vectura is handling the distribution of all of Ford Sollers’ volumes in Russia, including out of its plants in Vsevologsk, Naberezhnye Chelny and Elabuga. It is also managing shipments from Ford partners in Nizhny Novgorod and Ulyanovsk involved with the modification of Transit models.

Glukhov stressed the new arrangement would mean Ford didn’t have to look for extra forwarders or automotive haulage at peak periods and that it would also simplify the paperwork for the OEM. Meanwhile, the length of the new contract between Ford and Vectura has also allowed the introduction of various measures to improve the logistics involved, said Karibov. “When you have a short contract for one or two years, it is hard to introduce any sustainable improvements in the logistics service but here, we were able to,” he said.

One good example, said Glukhov, was the opening of a finished vehicle storage facility next the Ford Sollers plant in Naberezhnye Chelny (pictured) in December. “The warehouse is located 250 metres away from the plant and has an overall footprint of almost six hectares, with the area for car storage occupying 4.3 hectares,” said Glukhov, adding that it met all of Ford’s quality standards and provided room for future expansion.

Moving cars that were previously held in stock outside the Ford Sollers plant to the new compound gave the OEM the ability to produce more cars and ship them faster, said Glukhov.There are also clear opportunities for joint development of export supplies with Vectura’s parent company Adampol (now majority-owned by Hyundai Glovis). Karibov explained that while Vectura could itself participate in the development of export supplies there were different regulations for automotive carriers between Russia and the European Union that meant the majority of Vectura’s own trucks could not be used in Europe.

Adampol could well become involved in exports of cars from Russia, confirmed Glukhov. “We are already carrying out such things as the loading of cars at the warehouse in Russia, with shipment to Bialostok or Malashevichi, where Adampol has another big warehouse,” he said. “Here we can reload European automotive carriers for onward shipment to final destinations. Also we can organise direct shipments from Russian warehouses with the use of Adampol’s fleet.”