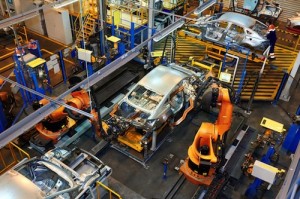 Ford’s joint venture with Russian vehicle maker Sollers has started production of the latest Ford Mondeo model at the Vsevolozhsk plant near St Petersburg. It said it was the first of four new models being introduced to the Russian market this year, including new Focus and Fiesta models. The Focus will also be made at Vsevolozhsk, in the second half of this year, while the Fiesta will be made at the plant in Naberezhnye Chelny, Tatarstan.

The move comes as something of a surprise given the continued fall in the Russian car market, which has seen carmakers, such as VW and Peugeot-Citroën’s local joint ventures idle production, and has led GM to pull production out of the country almost totally.

However, Ford has not revealed planned figures for output. It is not in the top 10 selling brands in the country, all which have posted percentage declines in sales in March and for the year to date.

In fact, the Russian light-vehicle market posted the highest rate of monthly contraction in March this year since the decline in 2009, according to the latest data released by the Association of European Businesses (AEB). It shows a decline of 42.5% year-on-year to 139,850 units for the month.

“There is little prospect of the general economic environment improving in the short term and the recent, bold decision by GM to abandon Russia as a volume, full range car company, shows the pessimism about the short-and medium-term prospects of the Russian market,” said analyst firm IHS Automotive in a statement.

IHS noted that macroeconomic and political circumstances were “completely undermining any possibility of positive sales growth in the market” and that the weak rouble continued to push up the price of imported completely built-up units (CBU), and imported components.”

Ford, however, saw potential in the market and said it would increase component and raw material localisation to reduce costs and lower exchange rate exposure.

“Ford Sollers is continuing to invest in expanding the Ford vehicle portfolio in Russia, and to modernise our production facilities,” said Ted Cannis, president and CEO, Ford Sollers. “The start of production today of the all-new Ford Mondeo is more proof of our commitment to bring the latest Ford models to our Russian customers.”

He went on: “While in the short term, Russia remains an extremely volatile and challenging market, we believe the market likely has significant potential in the longer term.”

Ford Sollers has recently made further investment in equipping the Vsevolozhsk plant, bringing the total investment there to $400m. The company said it would also start local production of engines at its newly constructed engine plant in Elabuga, Tatarstan, later this year.